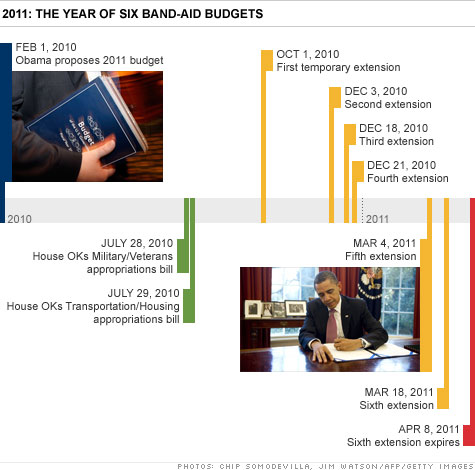 NEW YORK (CNNMoney) -- The fiscal year is 189 days old, and the federal government is still operating without a long-term spending bill. And now, if lawmakers can't cut a deal, the government will shut down.

Usually, lawmakers make some effort to pass a real, 365-day budget. Not this year.

Instead, lawmakers have passed six short-term spending bills. With their Friday deadline bearing down, the two parties remain billions of dollars apart on spending cuts.

"This is just an eyeball-to-eyeball moment where Republicans want to exercise their power," said Julian Zelizer, a professor of history and public affairs at Princeton University. "And Obama is trying to defend his reputation with Democrats."

As even school children know, Congress has the responsibility to appropriate funds for the government to spend. It's right there in Article 1 of the Constitution. But this year -- and let's not mince words -- lawmakers have fallen down on the job.

Of course, short-term spending bills are nothing new. Congress has enacted at least one every year for all but three of the past 30. But six in one year? How did it come to this?

Here's what Congress did manage to do: The House produced two of 12 appropriations bills. The Senate has not voted on a single one. Lawmakers couldn't even agree on their own legislative budget.

In the absence of a full-year budget, lawmakers have instead passed six short-term spending bills called "continuing resolutions." Designed to bridge short-term gaps in appropriations, Congress has approved one after another to keep the government running. Average length: 31 days.

As if to call attention to their own failure, both Republicans and Democrats have spent months issuing high-profile calls for a return to responsible budgeting.

Yet they have made no progress.

The latest stalemate has lawmakers about to plunge into the precipice as they argue over a few billion dollars and a set of contentious political issues -- like abortion -- that have been inserted into the debate.

On Wednesday, lawmakers from both parties met at the White House in the hopes of reaching an agreement. They did not.

What happens next is largely unclear. One scenario is that lawmakers will pass another short-term bill before Friday. There also might be a minor miracle in the form of a six-month spending deal that would cover the rest of the fiscal year.