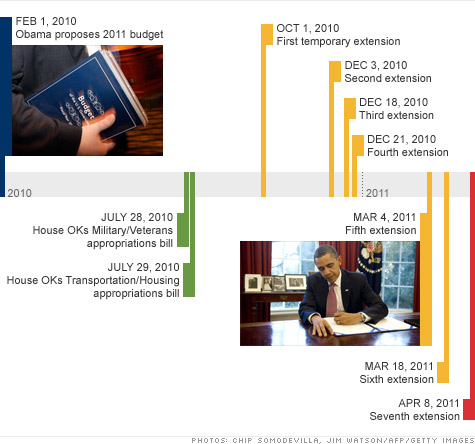 NEW YORK (CNNMoney) -- And on the 190th day of the fiscal year, Congress passed ... yet another temporary spending bill.

This one -- the seventh -- is billed as a bridge to a real budget that would set spending levels about $38 billion below where agencies started the year.

And it allowed Congress to narrowly avert a government shutdown.

But not before Congress -- with President Obama mostly just out of sight, occasionally scolding lawmakers to do a deal -- took the nation on a harrowing ride.

As even school children know, Congress has the responsibility to appropriate funds for the government to spend. It's right there in Article 1 of the Constitution. But this year -- and let's not mince words -- lawmakers fell down on the job.

Of course, short-term spending bills are nothing new. Congress has enacted at least one every year for all but three of the past 30. But seven in one year? How did it come to this?

Here's what Congress did manage to do: The House produced two of 12 appropriations bills. The Senate didn't vote on a single one. Lawmakers couldn't even agree on their own legislative budget.

In the absence of a full-year budget, lawmakers have instead passed seven short-term spending bills called "continuing resolutions." Designed to bridge short-term gaps in appropriations, Congress has approved one after another to keep the government running.

As if to call attention to their own failure, both Republicans and Democrats spent months issuing high-profile calls for a return to responsible budgeting.

The latest stalemate had lawmakers veer toward the precipice as they argued over a few billion dollars and a set of contentious political issues -- like abortion -- that were inserted into the debate.

There were multiple White House meetings and hours in which earnest aides tried to reach an agreement.

What happens next? Congress has given itself another week to pass a budget and again avoid a shutdown. See you next week.