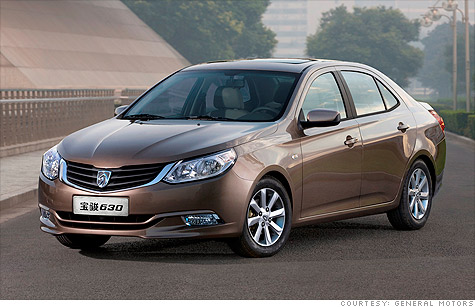 The Baojun 630 will be the first GM car specifically made for China. By Peter Valdes-Dapena, senior writerApril 19, 2011: 10:01 AM ET
Follow Peter on Twitter: @PeterDrives

The Baojun 630, a mid-sized sedan, was developed in China by GM's Chinese partnership, SAIC-GM-Wuling. All international automakers operating in China are required to work in partnership with Chinese automakers.

The car is powered by a 1.5-liter, 108-horsepower engine and gets about 34 miles per gallon, GM said Monday.

The car will go on sale in China "shortly after the show concludes," GM said. To market the car, SAIC-GM-Wuling has launched a nationwide "Happiness Campaign," encouraging people to submit stories telling how they have pursued happiness in their lives.

"The results will be announced during the official launch ceremony for the Baojun 630," the automaker said in its statement.

GM also unveiled the 2013 Chevrolet Malibu at the Shanghai show. That car, a redesigned version of GM's popular mid-sized sedan, will be sold in the U.S. as well as in China. The new, wider Malibu has a more aggressive design and new 2.5-liter, four-cylinder engine.

How to crack Asian business culture