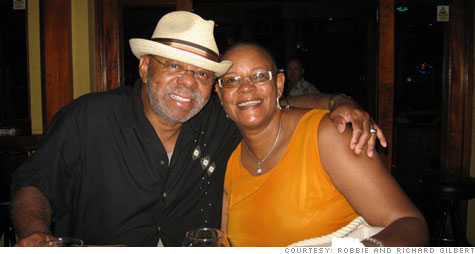 The Gilberts were on track for a comfortable retirement until they lost their savings to a Ponzi scheme. By Blake Ellis, staff reporterApril 22, 2011: 4:26 PM ET

Now, he's desperate for any work he can get.

"I've been looking for jobs but I'm too old, nobody wants to hire you at this age so it makes it rough -- I drove a bus for 35 years, so what am I supposed to do now?"

Frances Wills, 67 years old and also a former bus operator, has 75 cents to her name and can't pay rent after losing her $156,000 retirement fund.

"I can barely pay for my home or even the utilities bill -- and I live in a mobile home."

Bradley and Wills had transferred their retirement savings into investment accounts run by Thomas Mitchell, an investment adviser who gained the trust of a small community of retired bus and train operators in the Los Angeles area.

The Department of Justice is now charging Mitchell with running a 15-year Ponzi scheme that collected $15 million from a group of 150 retirees, causing them to lose at least $7 million in retirement savings.

Unlike Bernie Madoff's multi billion dollar scam -- which targeted many wealthy investors -- this smaller-scale fraud has stolen lifelines from retirees of modest means.

"People losing their retirement money puts them in a much more serious position, with some of the victims in this case actually having to go back to work -- in addition to losing their homes and money," said Harvinder Anand, assistant United States attorney for the Central District of California and the prosecutor assigned to the case.

Mitchell has agreed to plead guilty to mail fraud, which mandates a maximum of 20 years in federal prison. He made his initial appearance in court on Thursday, and he's expected to enter his official guilty plea on May 2.

He has also agreed to pay restitution of $7 million at or before sentencing, but many of his victims -- as well as authorities involved in the case -- worry that he doesn't have the money. Mitchell's defense attorney, Bob Bernstein, had no comment.

In the case of Madoff's scheme, many victims got some compensation from the Securities Investor Protection Corp., an insurance fund financed by brokerage firms that covers up to $500,000 in losses for individual investors.

But SIPC funds are usually granted when a member brokerage firm fails to pay its customers. Since Mitchell appeared to be acting solo, it's unlikely that SIPC would come to the rescue of any of his victims, a spokeswoman for SIPC said.

According to the plea agreement filed with the United States District Court, Mitchell promised his clients high returns of between 9% and 12.5% on their investments to lure them in, but then put only "a miniscule fraction" of their money in legitimate investments.

He would then make monthly interest payments to his clients to keep them from worrying. But he would use the rest of the savings they had invested for himself.

"With the money he sent me, plus social security, I was able to live comfortably -- you know, pay the bills and buy a lollipop at the store once in a while," said Wills. "Now my friends say, 'let's go out to dinner,' and I can't even do that anymore."

Mitchell spent their money on his own "lavish lifestyle," which included a high-end apartment, three BMWs and luxury vacations, according to the plea agreement.

As a result, most of that money is now feared gone, according to the Department of Justice, leaving many of Mitchell's victims wondering if they'll ever see a penny of the savings they spent most of their lives working to earn.

Even some of his own family members were swindled in his scheme, including his cousin, Robbie Gilbert.

Gilbert, 55, voiced her anger on Facebook after hearing the news and losing access to her $150,000 retirement fund. Gilbert posted a birthday message on Mitchell's Facebook wall for his friends and family to see:

"Tom, I can't wish you a happy birthday, because the trust I had in you was betrayed. You stole my retirement money and put my family in financial jeopardy, and you are not even man enough to speak with me about what you have done. Not to hate you has been a real test of faith. Your former cousin, Robbie Gilbert (YOU HAVE SHAMED YOUR FAMILY)".

Another victim, Charles Black, spent 23 years as a service attendant for the MTA bus system. He'd heard about Mitchell from a coworker, who claimed to have great success investing with him. When he left his position at the bus company, he put his entire retirement stash -- $250,000 -- into accounts with Mitchell.

"How could somebody take advantage of people knowing that they're just ordinary working people trying to sustain a life and the American dream of retirement?"

And the modest retirement dream Bobby Bradley hoped to enjoy has now become a nightmare.

"That money would have helped me to live out the rest of my life and enjoy a few things, but more or less just take care of my basic needs -- nothing extravagant," said Bradley.

"I can't afford anything anymore. It takes everything I bring in from social security just to survive, but even then it ain't enough to cover all the bills," he said.