Madoff trustee ready to distribute $2.6B to victims 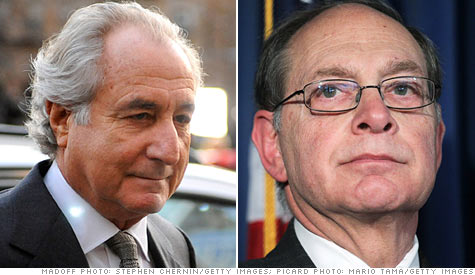 Irving Picard, right, the court-appointed trustee in the recovery of assets stolen by Ponzi schemer Bernard Madoff, left, hopes to begin distributing money to victims by the end of March. By Aaron Smith, staff writerMarch 9, 2011: 8:16 AM ET

NEW YORK (CNNMoney) -- The court-appointed trustee charged with recovering assets stolen by Ponzi schemer Bernard Madoff is ready to distribute $2.6 billion worth of recovered funds to the victims.

This will be the first time that Madoff's victims will receive recovered funds.

Together on a press call Tuesday, trustee Irving Picard and chief counsel David Sheehan said that they will make a request to federal bankruptcy court at the end of March to free up a portion of the $10 billion in assets that the trustee has recovered so far.

"We will make a distribution as soon as we can after the hearing [at the end of March] and assuming the court approves it," said Sheehan.

The trustee recently said that he'd recovered about half of the $20 billion lost to Madoff's scheme. Much of this comes from the $7.2 billion settlement agreement reached with Barbara Picower, the widow of Jeffry Picower, who died of a heart attack in 2009. Picower is believed to have been the number one beneficiary in Madoff's Ponzi scheme, because he withdrew $7.2 billion more than he invested with Madoff's firm, according to Picard.

Sheehan said distribution of the Picower funds is being disputed by some Madoff investors. These people claim that since they were led to believe they had a certain net worth, that they should be compensated in that amount.

Madoff victims: 'The man is a monster'

Of the 16,269 claims that have been filed with Picard's firm, the trustee has determined that only 2,408 claims, worth a total of $6.58 billion, are eligible for compensation.

Most of the rejected claims were tossed because they're from "third party" investors who went through hedge funds, instead of individual investors, who are covered by the Securities Investor Protection Corp. (SIPC), an industry-sponsored organization that provides financial protection.

The 2,408 victims acknowledged by the trustee have already received full or partial compensation from SIPC, which is funded by dues paid by brokerage firms and covers up to $500,000 worth of losses for individual investors.

So far, SIPC has paid more than $793 million to Madoff victims. The remaining $6.06 billion worth of recognized losses must be compensated through the recovery of stolen assets.

The trustee, with the help of U.S. Marshals, has confiscated Madoff's properties to pay back his victims, including lavish homes in Manhattan, the Hamptons, Florida and France, as well as yachts and diamond-studded watches and jewelry.

The trustee has also sued about 500 investors, who withdrew more money from Madoff than they invested, in his effort to recapture lost assets. But many of these investors insist that they're victims, not beneficiaries, who had no idea that they were withdrawing money from a Ponzi scheme.

The trustee is also suing financial firms for allegedly participating in the scheme, including HSBC, UBS and JPMorgan. Picard has also sued members of the Madoff family, as well as the owners of the New York Mets baseball team.

During the call Sheehan said that he is taking the position that family members "knew or should have known" about the Ponzi scheme.

The trustee estimated that he might possibly track down another $7 billion or $8 billion in stolen funds, in addition to the $10 billion already recovered. If that's the case, then he will have collected between 85% and 90% of the $20 billion stolen by Madoff.

"This is litigation and you don't always get everything you're looking for," said Sheehan.

Meanwhile, Madoff is languishing in a federal prison in Butner, N.C. He was sentenced to 150 years after pleading guilty, in March 2009, to orchestrating the largest Ponzi scheme in history.

Madoff victims fire back: "The man is a monster"

Madoff says his victims were "greedy"