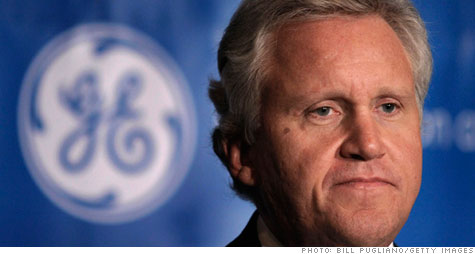 The Fairfield, Conn.-based industrial conglomerate logged earnings of $3.4 billion, or 31 cents per share, up 48% from a year earlier. Analysts polled by Thomson Reuters had expected earnings of 28 cents a share.

"As today's results show, GE has emerged from the recession a stronger, more competitive company," CEO Jeffrey Immelt said in a press release.

GE Capital, the company's banking division, earned $1.8 billion after tax, more than triple its year-earlier results. The company's biggest division is still recovering from the huge losses suffered during the recession.

GE's energy infrastructure business, which accounts for roughly a quarter of overall revenue, reported a 7% decline in earnings -- but Immelt said he expects that business to "return to growth in the second half of this year."

Overall revenue came in at $38.4 billion, exceeding expectations for $34.6 billion.

The company also raised its quarterly dividend for the third time in a year -- this time by one cent, to 15 cents per share.

"Our teams are working diligently to support our customers in Japan," Immelt said in a conference call with investors.

GE reported a tax rate of 53%, up from 16% in the year-ago quarter. Immelt attributed some of that increase to taxes on GE's NBC Universal sale earlier this year.

GE said three quarters of the profit it earned on the deal was wiped out by restructuring costs.