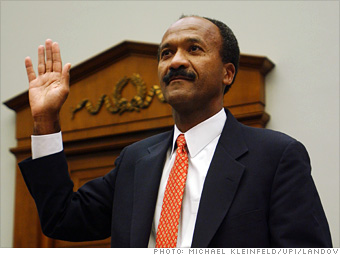 Former Fannie CEO Franklin Raines
Let's not forget Frank Raines, the Fannie chief who was forced out in 2004 amid an accounting scandal. The bookkeeping missteps led to a $400 million fine for Fannie Mae, but Raines - well-connected, imperious and tens of millions of dollars richer for his role - remains unrepentant. "This settlement is not an acknowledgement of wrongdoing on my part, because I did not break any laws or rules while leading Fannie Mae," he said in April following an SEC settlement that required him to pay just $2 million. "At most, this is an agreement to disagree."