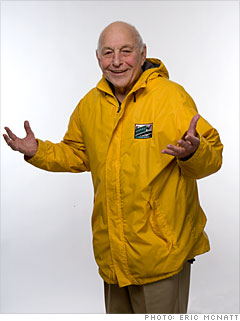 Manager: Martin Whitman
Expense ratio: 1.08%
Category: World stock
One-year return: -54%
Return since inception (1990): 10.6% (annualized)
Get quote: TAVFX
Marty Whitman has been a value investor for more than five decades, and a legend for nearly half that period. So when the 84-year-old calls today's market a "once-in-a-lifetime opportunity," that's saying something. Says Whitman: "I've never seen pricing like this in high-quality, creditworthy companies."

As manager of the Third Avenue Value fund since 1990, Whitman has combed the world for rock-solid companies whose stock prices are discounted by 40% or more, relative to his view of their intrinsic value, and that have an ability to increase that value by 10% or more annually. Even after a brutal 2008 in which his fund dropped by 48%, Whitman's approach has produced annualized gains of better than 6% over the past decade, some 4.5 percentage points better than the MSCI EAFE index. More than half of the fund's assets are now invested in Asian companies, from Hong Kong real estate giant Cheung Kong Holdings to Toyota Industries to South Korean steel producer Posco, whose stocks have been hammered, even though they have suffered less than American businesses. Worse, Third Avenue Value has been crushed by redemptions, forcing Whitman to jettison some holdings. Whitman has kept about 7% of fund assets in cash, in part so that he doesn't have to unload shares at fire-sale prices.

Whitman remains confident in his portfolio - he blames his "poor 2008 performance" on an "irrational stock market" - and wishes only that he had more money to put to work. Whitman believes Toyota, for example, should be poised for a rebound, particularly given the woes of the Big Three U.S. automakers. Whitman has been jumping on other opportunities, upping his stake in oil and gas producer EnCana, for example, and snapping up distressed but performing bonds with lucrative payouts of 23% to 54%. Still, he's putting a premium on safety. "Cheap or deep value is no longer a sufficient condition for investing," he says. "It has to be combined with creditworthiness."