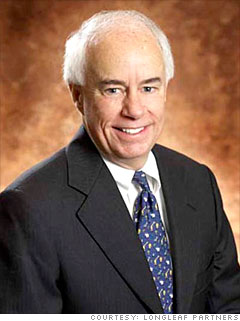 Get quote: LLPFX
This year has been a disaster for value managers, as the low-priced stocks they love have only gotten cheaper. The Longleaf Partners fund is a prime example. The portfolio has tumbled a staggering 54%, in part because falling energy prices slammed large holdings such as Chesapeake Energy and Pioneer Natural Resources. Still, the fund has outpaced the S&P by more than two percentage points a year over the past decade.

Managers Mason Hawkins and Staley Cates are sticking with their deep-value style, hunting for industry leaders with clean balance sheets and smart management whose stocks trade at discounts of 40% or more to the team's estimates of their true worth. The fund usually holds around two dozen stocks, with large stakes now in stalwarts such as Disney, eBay, and FedEx.

With bargains plentiful, as Hawkins puts it, "We believe that the risk of trying to sit on the sidelines and time the reentry into these good businesses was problematic." So they're shopping, and in Hawkins's view, "We've put our foundation in place for the next decade." They've upped their stake in Chesapeake Energy, for example, based on their view that natural gas remains effectively cheaper than oil and has environmental and political advantages. Top holding Dell, meanwhile, should benefit from aggressive cost cutting and improved margins as well as a stock-buyback plan. If Dell and the fund's other key holdings merely inch up from outrageously cheap to moderately discounted, Longleaf will flower once again.