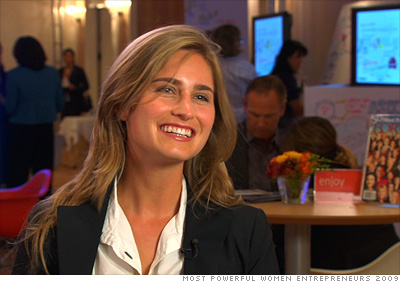 They started with a simple concept: Sell burlap tote bags to help eliminate world hunger. The product has a clever appeal: Every bag is marked with a FEED stamp and a number that signifies how many children your purchase will feed.

"We're really communicating through our customers," says Bush, the 25-year-old niece of former President George W. Bush. She hatched the idea in her Princeton dorm room; Gustafson, 29, later joined her from the United Nations.

The women are making their start-up social and socially responsible. FEED is active on Facebook and Twitter. The bags are eco-friendly and reusable, and retailers like Whole Foods, Barnes & Noble and Kenneth Cole that sell their bags take a cut on their usual profit margin to support the cause.

By giving most of their profits away, Bush and Gustafson have raised more than $5 million for the UN World Food Programme.

"Hunger kills more people than malaria, tuberculosis and AIDS combined," says Bush. So there is plenty to do the world over. But next? They want to focus closer to home, addressing the growing hunger crisis in the U.S. --P.S.