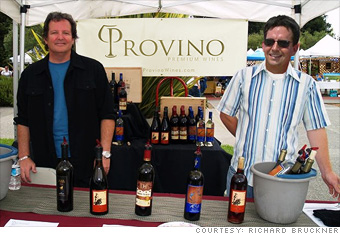 I was a venture capitalist for four years and I've raised a lot of capital in my time, but I was stumped when no lenders wanted to talk to us.

I launched Provino with Rich in 2008, catering to wine enthusiasts who want to find the perfect bottle and also to vineyards and wineries that need help reaching customers. We financed the first year ourselves, after realizing we were wasting time trying to get a Patriot Express SBA loan -- the banks were simply not lending.

We grew very quickly by bootstrapping everything we possibly could. When the financial meltdown hit its peak, we were still expanding.

Six months later, in October, we had established ourselves and decided to try the banks again. With a proven model, 10 employees and a business that was just months away from the break-even point, the risk was essentially gone. But still, we had no luck. This time, the banks declined us because the Patriot Express program is only for startups and our progress landed us in the 'established business' category, making us ineligible. What logic!

We were really frustrated and tried many national banks before approaching Exchange Bank, a smaller institution headquartered right here in Santa Rosa. They really understand the wine industry as many of their clients are local vineyards. We scored an unsecured six-figure line of credit at the end of 2008. Soon after, they increased it.

The months and months leading up to that point were utterly frustrating. We heard Obama talk about helping small businesses and the banks received billions, but there was a huge disconnect between the words from the top and what was actually happening.

Fortunately, our story has a happy ending. Given our growth thus far and the direction we see the company headed, we want to be able to seize any opportunities that present themselves. Now we will be able to do so.