The visionaries of Detroit

The once-great city in crisis needs all the innovation and optimism it can muster. In this installment in the Visionaries series, Fortune profiles a dozen people in metro Detroit, from entrepreneurs to big-business leaders. Their ideas and energy offer hope for a more vibrant Detroit economy. 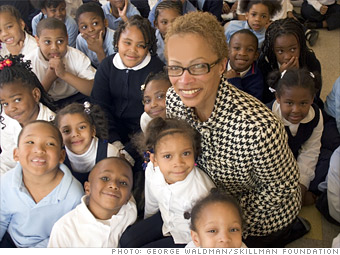 Goss heads a $457 million Detroit charity that devotes the majority of its giving to one cause: the city's children. Using that leverage, Goss has made progress in bringing credibility to the city's disastrous public-school system, where barely 3% of its fourth-graders meet national math standards.

She did it with the lure of a $200 million fundraising infusion for all the city's schools, without prejudice toward one kind or another -- public, charter or private. Goss persuaded everyone from parents to teachers to politicians to agree on higher standards and bolder actions.

Goss, a grandmother of three and a long-distance runner, is known as tireless and immune to negativity. She believes the schools are now accountable enough to attract national philanthropy. "Detroit is ready for investment," she says.

By Doron P. Levin
NEXT: Ralph Gilles
Last updated August 09 2010: 11:01 AM ET
More from Fortune
Out-of-towners change Detroit's ways
For the first time in memory, all of the Detroit Three are run by industry outsiders, and they are making their presence felt in different ways. More
Detroit's new factory of dreams
What do you do with an old car-body plant nobody wants? You turn it into a creative hive for upstart businesses that offers a spark of hope for Detroit's economy. More
Turning foreclosures into forests
Facing thousands of vacant homes, cities find the best option may be to downsize their town with the help of land banks. More