In a soaring market, many Fortune 500 stocks posted strong returns in 2010. But the 20 that follow rewarded shareholders the most. Will they keep rising? 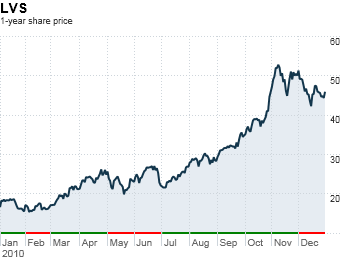 Its name says Las Vegas, but this casino operator tripled in market value in 2010 thanks to its fast-growing business in Asia. The company owns the Venetian and Palazzo on the Vegas strip, but about 85% of its sales last year came from Asia, with around 60% of that alone coming from Macao. After all, it's now the world's biggest gambling market and the only place in China where casinos are legal.

The growth there is stunning: While gambling proceeds in Las Vegas rose by 4% to $5.7 billion in 2010 over the previous year, Macao's gaming revenues rocketed 58% to $23.5 billion during the same period. Las Vegas Sands plans to open its fourth Macao casino later this year.