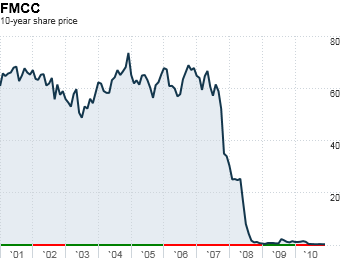 After the government took over Freddie Mac in the summer of 2008, its stock, along with that of counterpart Fannie Mae, traded in dollar territory for the next two years (they were finally delisted from the NYSE in 2010).

Though both companies' earnings have improved since the depths of the crisis -- not a huge surprise, given that they each lost more than $50 billion in 2008 -- Fannie and Freddie are still struggling to work through foreclosures and get bad loans off of their books. The government remains divided over whether or not to cut ties with the twosome, which have borrowed more than $150 billion from taxpayers.