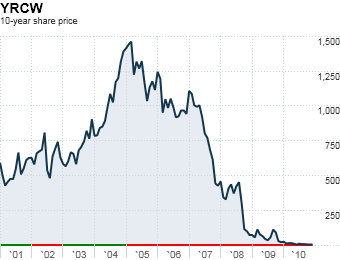 It seemed like a good idea when trucking company Yellow Corp made two big acquisitions in 2003 and 2005, forming industry leader YRC.

But the timing proved disastrous. YRC had to take on significant debt to fund the purchases, which would come back to haunt it when shipping volumes tanked during the recession. The company's profits sank as liquidity vanished, and it narrowly avoided bankruptcy by persuading investors to exchange $500 million worth of debt for equity in 2009.

YRC stayed alive, but hasn't left the emergency room: Its shares tumbled last March when it disclosed that its auditor had voiced concerns about the company's ability to stay solvent. (Note: a 1-for-25 reverse split in October 2010 is reflected in the chart.)