Over the past decade, despite market ups and downs, Fortune 500 stocks paid off overall, returning nearly 7% per year to investors. Shareholders at these companies weren't so lucky. 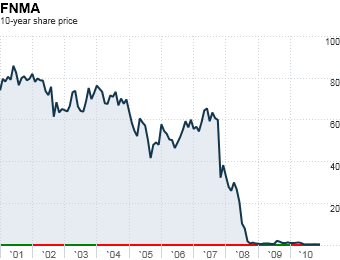 A housing-industry giant that was built over the course of 70 years, Fannie Mae came crashing down in the summer of 2008. The company, along with its younger, smaller sister Freddie Mac, bought residential mortgages and sold guaranteed securities with the implicit backing of the U.S. government.

Before their implosion, Fannie and Freddie were involved in about half of the entire American mortgage industry. When the subprime mortgage market caved in, the duo took enormous write downs on their portfolios and shareholders were nearly wiped out. As losses mounted in the tens of billions, the government moved both entities into conservatorship.