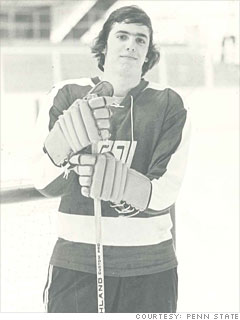 John P. Surma, United States Steel
Once or twice a week, this CEO gets up early to play defense in the Pittsburgh Morning League. He began his career on the ice at age 14 in Mt. Lebanon, Pa., not far from the headquarters of the company he runs today. Surma ('76) went on to play hockey at Penn State (then a club sport) and was inducted into the college's hockey hall of fame in 2005. --J.S.