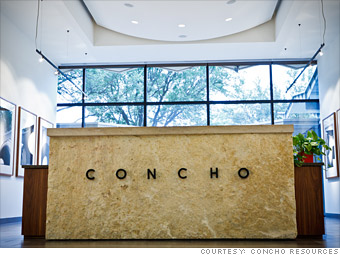 When times are good in the oil industry, they're really good. In this case, high prices have helped propel revenues at oil and natural gas company Concho Resources as its aggressive expansion increased its production to 15.6 million barrels.

Last year Concho, a five-year-old company mostly built from acquisitions, drilled 662 new wells and made its largest purchase, taking on Marbob Energy for $1.65 billion. According to the company's annual report, the deal makes Concho the most active driller in the Permian Basin, which stretches across west Texas into New Mexico. Says CEO Tim Leach: "In the last five or ten years, through new technology, there's been more oil discovered out here than there has in the last 90 years."
Get stock quote: CXO
Revenue ($ millions): $1134.2
Net Income ($ millions): $179.4
Industry: Energy

L. Michael Cacace, Douglas G. Elam, Betsy Feldman, Kathleen Smyth, and Anne Vandermey, with Josh Dawsey, Mina Kimes, and Sam Silverman
Network with Concho Resources
What businesses do you think are primed to grow in this economy?
From the September 26, 2011 issue.
Revenue and profit figures reflect the four quarters ended on or before April 30,2011.
Total return is through June 30, 2011.
Top 3
See the rest
See the rest
See the rest
How we pick the Fastest-Growing
To qualify, a company -- domestic or foreign -- must be trading on a major U.S. stock exchange; file quarterly reports to the SEC; have a minimum market... More