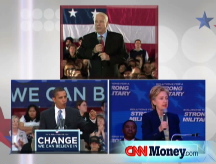 NEW YORK (CNNMoney.com) -- Gas prices are expected to keep up their record rise this spring, soaring well past $4 a gallon in some areas. Now Congress wants to know what to do about it.

Gas prices have risen more than 18% so far this year. Retail gasoline hit a record $3.62 a gallon on average nationwide on May 1, according to AAA, the auto group.

"This is not just any industry we're talking about, it's the key component of a modern industrial society," said Rep. John Conyers, D-Mich. "Oil impacts every aspect of our economic life."

Much of gas' jump can be attributed to crude's dramatic run up. Crude prices hit a record $123.56 a barrel Wednesday, a day after a Goldman Sachs analyst predicted oil could rise as high as $200 over the next six months to two years.

The Department of Energy said Tuesday it expects gas prices this summer - when prices usually peak - to be higher than originally forecast.

It forecast that the national average price for a gallon of gas in June will be $3.73, up 11 cents from April's estimate. The Energy Department also said it expects gasoline to average $3.52 a gallon in 2008, which would be 71 cents above last year's average.

Truckers, gas station owners, and refiners have seen profits tumble because of the high price of fuel.

"High fuel costs affect everything - everything in this room came on a truck at least once," said president of the National Association of Small Trucking Companies David Owen in testimony.

"Consumers have several choices: They can buy smaller cars, drive less, cut back on trips or carpool, but truckers don't have those options - they're stuck between a rock and a hard place," Owen added.

Gas station owners have been the target of suspicion of gas gouging, but in fact their profits have been squeezed too as they try to keep prices low as possible to remain competitive.

"When you look at oil companies' earnings reports, remember that retailers aren't sharing in any of that profit," testified Bill Douglass, chief executive of gas retailer distributor Douglass Distributing Co. "Fuel prices must be as competitive as possible, because consumers will drive 10 minutes to save 3 cents a gallon."

Douglass also noted that credit card companies collect 9 cents per gallon of gas sold, leaving many retailers with no profit from the gas they sell.

"Many retailers cannot survive on these small margins," said Douglass. "Many convenience stores are going bankrupt and are being forced out of business."

Refiners have also found turning a profit more difficult lately because the price they pay for oil has risen much faster than the price at which they can sell the gas they produce.

One possible short-term solution favored by most of the Committee's Republican members is the commencement of drilling in the intercontinental shelf in the Arctic to produce domestic oil.

Rep. Lamar Smith, R-Texas, noted that the United States could benefit for five years of independence from foreign energy from the oil located beneath the shelf.

"Drilling in ANWR is not the answer," said Sutton. "Not only will that oil fail to reach us in a timely way, weaning ourselves off of oil is the answer."

Many energy industry analysts blame oil speculators for cashing in on the fuel cost crisis and, in the process, boosting the price of oil. Some lawmakers have expressed a desire to regulate speculative trading, but others claim that such regulation would serve as an affront to free markets.

What to do with Big Oil

Much of consumers' and politicians' anger has also been pointed in the direction of oil companies. While rising oil prices have contributed to higher food costs; lower trucking, refining, automaker and airline profits; and a change in Americans' driving habits, Big Oil has enjoyed record profits in the past few quarters.

"The matter that this committee oversees are at the heart of the problem: Anti-competitive consumer practices," said director of research of public interest group Consumer Federation of America Mark Cooper in testimony.

Cooper said oil companies and the Organization of the Petroleum Exporting Countries are in collusion to maximize profits, noting production costs make up only $20 of oil's price.

"Cartels are hard to run, but when everybody's pockets are full of money, it gets easy," Cooper added.

Oil companies respond that as demand for oil and petroleum products rises globally, production costs also increase and oil becomes harder to find. But critics say the amount that Big Oil invests in production and exploration is tiny compared to their net income, leading some lawmakers to call for a windfall tax on oil companies' large profits.

"I would be shocked and dismayed if anyone said the oil companies are struggling and in need of these subsidies," said Sutton.

But taxing oil companies has been met with stiff opposition from House Republicans.

"Increasing taxes on domestic production of oil means it costs more money," said Rep. James Sessenbrenner, R-Wis. "That means they'll buy more oil from OPEC, and the price will be passed onto the consumer."

Wednesday's hearing comes a day after members of the House Committee on Transportation and Infrastructure heard testimony about the jump in diesel prices. The rapid rise in diesel has hampered the trucking industry and contributed to soaring food costs.

An earlier version of this story incorrectly quoted Rep. Sutton.