More people are looking to live closer to work and shopping, and find relocating saves them hundreds of dollars a month in gas.

America's Money: Gas crunch hits home
The record-high price of gasoline is putting a strain on motorists - and spurring some to shift their habits. Here are their stories.
View photos
Gas prices bruise sports 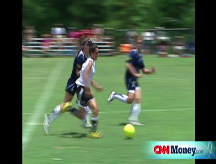 NEW YORK (CNNMoney.com) -- It may seem a bit drastic, but more and more people are taking what is perhaps the ultimate step in cutting gas prices: They're moving.

Peaches Stevens used to rent an old farm house in southern Indiana. She loved the setting, but her job as a high school science teacher was 62 miles to the north.

Coaching golf after school made carpooling difficult, and even though her Dodge Neon got an impressive 30 miles a gallon, she was still spending upwards of $400 a month on gas.

So she moved. Now Stevens, 49, rents a place eight miles away from school. Plus, she bought a Honda scooter that gets 80 miles a gallon. Now she can get to work and back for about $16 a month.

"I'm doing it all for economic reasons," said Stevens, who figures she'll save enough in gas to pay off the $2,400 scooter in under 7 months. "I loved [the farmhouse], but I do feel like I'm doing the right thing."

Stevens is part of a national trend of high gas prices playing a major role in where people choose to live. Factors like distance from work, access to public transportation, and proximity to shopping are gaining ground on square footage and whether or not the home has a yard and pushing people into more densely packed areas.

"The high cost of gas is cited as a driving factor in increased interest in urban living," said Jim Gillespie, chief executive of Coldwell Banker, a national realty franchise. "Over the past several years we've seen a boom in downtown living all over the country."

It seems like the people actually making the move so far seem to be renters as opposed to owners, as not renewing a lease is obviously much easier than selling a home.

While their wallets may be happy, whether the quality of life is improving for the people who move is debatable.

"I went from a beautiful home with a big back yard to an itty-bitty studio apartment," said Erinn Thomas, who moved from a suburb of Reno, NV, to the downtown area to save on gas. "But it's what I had to do to eat."

So 25-year old Thomas now rents a place just a mile from work.

She says she'll miss the space of the suburbs, but in addition to the $200 a month she hopes to save on gas, she also aims to pocket another $100 a month - and probably improve her health - by staying away from the Drive-thru window at the local fast-food joints.

"I don't have to drive anymore and I can buy a bike," she says.

In addition to personal health, some are also tipping their hat to the health of the planet.

Jason and his wife Tara moved to Orwigsburg from a town 25 miles away. High gas prices weren't the only reason they moved - the couple hopes to start a family and wanted to be closer to relatives in the area.

But they played a big part, and Tara's commute to her teaching job has been cut in half.