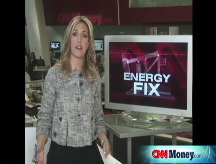 "What we really need is to produce more, use less and find new sources of power," McCain said in prepared remarks to a briefing on energy and economic policy in Springfield, Mo. "The next president must be willing to break with the energy policies not just of the current administration, but the administrations that preceded it, and lead a great national campaign to achieve energy security for America."

The Arizona senator outlined an energy plan that would include lifting the ban on offshore drilling for oil, expanding nuclear power production and acquiring clean-coal technology.

President Bush reiterated McCain's call for a lift in the ban on oil drilling in the Outer Continental Shelf in remarks Wednesday. McCain said such drilling would have to meet "sensible standards of environmental protection," and states would decide whether to permit drilling on their shores.

McCain called nuclear energy "clean, safe and efficient" and said he supports the construction of 45 new reactors by 2030. The nation currently has 104 nuclear reactors, but has not built a new one in more than 30 years, since before the 1979 accident at the Three Mile Island plant in Pennsylvania.

He acknowledged that such an endeavor would face many hurdles.

"We will need to recover all the knowledge and skills that have been lost over three stagnant decades in a highly technical field," McCain said. "We will need to solve the complex problems of moving and storing materials that will always need safeguarding."

McCain said he would commit $2 billion per year to clean-coal research and development, so the country could further access its "oldest and most abundant" resource.

As for alternative energy, McCain said government should act as "an ally but not an arbiter" and let the market decide which energy sources should succeed.

"Much like his gas tax gimmick that would leave consumers with pennies in savings, opening our coastlines to offshore drilling would take at least a decade to produce any oil at all, and the effect on gasoline prices would be negligible at best, since America only has 3% of the world's oil," Obama said. "It's another example of short-term political posturing from Washington, not the long-term leadership we need to solve our dependence on oil."

The Illinois senator supports a windfall profits tax on oil companies and investing in affordable, renewable sources of energy.

Shooting the moon on renewables