Investors get out after credit-rating agency casts more negative light on U.S. automakers. 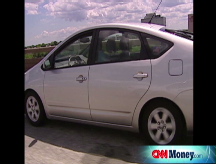 On Friday, Standard & Poor's Ratings Service placed the corporate credit ratings of GM, along with Ford and Chrysler LLC, on its CreditWatch list with negative implications.

"That's basically the same as saying they're in trouble," said Embersits.

A negative CreditWatch means ratings have a one-in-two chance of being downgraded in the next three months.

The average price of regular gasoline hit a record high of $4.08 a gallon last week, and remains more than a dollar higher than it was a year ago, according to a survey from motorist advocacy group AAA.

Automakers have been scrambling to avert disaster and shift manufacturing from large vehicles to smaller, fuel-efficient ones.

"I don't understand why it took so long for people to figure out how bad it's going to be," Embersits said.

Corporate cuts: General Motors said last week it reduced its workforce by 18,657 hourly employees through buyouts and early retirement programs. It said it will replace those workers with cheaper entry-level hires as it closes four pickup truck and sport utility vehicle plants.

Ford said it would delay the launch of its full-size F-150 pickup truck and cut third-quarter production by 50,000 vehicles.

As sales decline, General Motors could end up burning as much as $1 billion a month to stay afloat, according to some accounts, sparking talk that it may need to sell off under-performing marquee brands such as Hummer and Saab.