The venerable Wall Street firm once looked like it would escape the worst of the credit crisis. Now there's talk of a Bear Stearns-like collapse - or a sale. 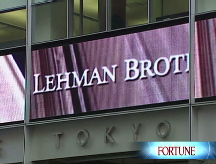 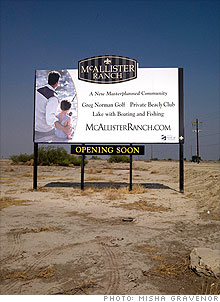 NEW YORK (Fortune) -- To understand what went wrong at Lehman Brothers, leave the canyons of Wall Street and head to the flatlands of Bakersfield, 120 miles northeast of Los Angeles.

That's where you'll find McAllister Ranch, envisioned as a 6,000-home, multibillion-dollar recreational community built around a Greg Norman-designed golf course, boating and fishing waters and a beach club. Now McAllister is three-square miles of fenced-off, almost lunar landscape punctuated by a half-finished clubhouse and a golf course gone to weeds.

So far Lehman's bets on McAllister and other real estate plays in Southern California's Inland Empire have cost Lehman at least $350 million.

None of Lehman's investment bank peers have this kind of exposure to the burst real estate bubble. Then there's the exposure all of them have: problems with collateralized loan obligations, leveraged buyouts, and mortgage-related securities. But Lehman insisted it was only minimally exposed to this kind of stuff.

Turns out, it wasn't. As a result, the bank and its shareholders have endured big losses; messy public demotions of the chief operating officer and chief financial officer; battles with short-sellers, who are betting that Lehman's share price, down about 70% on the year, will decline further; rumblings that the firm will be sold; and rumors (which we consider unfounded) that it will pull a financial El Foldo the way the late Bear Stearns did.

How has Lehman (LEH, Fortune 500) come to this? Read on, and we'll tell you Lehman's true history - and how management miscues, combined with historical forces outside Lehman's control, have put the firm in a world of hurt. We'll also tell you how we think the drama will play out.

McAllister Ranch is an apt symbol for Lehman's problems on several counts.

First, Lehman's commercial paper unit is on the hook for a $235 million loan it made to the development. Good luck trying to collect that debt. Worse, in 2006 - the height of the housing bubble - Lehman invested a total of $2 billion in deals with McAllister's developer, SunCal Cos., a Southern California firm severely spattered by the bursting of the real estate bubble. The $350 million McAllister loss looks increasingly like only a down payment.

Because it prided itself on real estate expertise - it helped popularize real estate-backed securities in the early 1970s - and investment prowess, Lehman risked far bigger proportions of its own capital doing deals than its major competitors did. Brad Hintz, a former Lehman chief financial officer who now follows the firm as an analyst at Alliance Bernstein, wrote recently that Lehman has more than 2.5 times its entire net worth tied up in complex, hard-to-value securitized products.

Only Merrill Lynch (MER, Fortune 500), among Lehman's peers, has a higher ratio, Hintz said - and Merrill is vastly larger than Lehman. What's more, Merrill has multibillion-dollar assets, such as stakes in Bloomberg LP and BlackRock, that it can sell quickly without interfering with its core businesses. Lehman has nothing similar.

Lehman's high-risk, high-reward strategy produced cash gushers during the good days - the firm reported almost $16 billion of profits from 2003 through 2007 - but those days are gone. Lehman recently reported a $2.8 billion second-quarter loss, which probably won't be its last unprofitable quarter. Two years ago Fortune lauded Lehman and its chief executive, Dick Fuld, because the firm was the best-performing investment-banking stock in the country. That was then.

Now Lehman finds itself stuck with all sorts of hard-to-sell assets and securities worth far less than what it has invested in them. For example, last October - with the credit crunch and real estate meltdown well underway - Lehman (in partnership with the Tishman Speyer real estate firm) paid $22.2 billion to do a leveraged buyout of Archstone, a big apartment developer. Lehman decided to go through with the deal rather than walk and risk paying a $1 billion breakup fee (which could presumably have been negotiated down, as happened in subsequent busted LBOs).

Lehman's Archstone losses could ultimately exceed what a breakup fee would have cost. The firm disclosed a $350 million Archstone charge to earnings last month, and that could be only the start.

"Archstone is the preeminent apartment developer, but the timing was off," says Craig Leupold, president of Green Street Advisors, a real estate consulting firm. "I'm looking at a decline of 10% to 15% in value for apartment complex values, which amounts to $2 billion to $3 billion off the purchase price."

That would be a staggering hit for Lehman, whose capital is only around $27 billion (including recent preferred-stock issues).

Founded in 1850 as a cotton trading firm in Montgomery, Ala., Lehman Bros. had a storied reputation for prudence and sound management.

So how did it end up in this pickle? Next: What went wrong