The mortgage giant takes a step toward a big stock sale that could ease fears of an imminent taxpayer bailout. 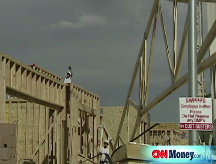 NEW YORK (Fortune) -- Taxpayers got some good news Friday: Freddie Mac wants to take your money just as little as you want to hand it over.

The struggling mortgage giant said Friday that it plans to raise $5.5 billion by selling common and preferred stock to shore up its balance sheet - a step that could reduce fears that a government bailout is around the corner.

Freddie had previously said it would raise that money, but on Friday it finally registered its stock with the Securities & Exchange Commission, a move that allows the company to proceed. Freddie didn't specifiy when the offer would come.

By diluting the stake of existing shareholders and saddling the company with costly preferred dividend obligations, raising capital could be costly for Freddie (FRE, Fortune 500) and its shareholders, who have seen the value of their investments drop 75% over the past year.

Freddie would presumably raise the rest of the money by selling preferred stock, but that won't come cheap either. Freddie's preferred dividend tab tripled from a year ago in the first quarter, to $272 million.

Despite the dilution that would come with a new stock offering, shares of Freddie surged for the third straight day in heavy trading Friday, as investors wagered that by raising new money the company would put itself in better position to weather the mortgage meltdown and resume making money when the economy rebounds.

Freddie and its larger cousin, Fannie Mae (FNM, Fortune 500), agreed to register with the SEC under a 2002 deal with legislators designed to put the two government sponsored enterprises on the same footing as other public companies when it comes to their financial reporting. Fannie registered with the SEC in 2003, but Freddie's registration was delayed after accounting issues surfaced. Together the companies own or guarantee $5 trillion in home mortgages.

Round and round it goes

It's been a head-spinning two weeks for Fannie and Freddie. The companies' shares lost more than half their value last week, amid fears that falling house prices will lead to big losses on the mortgages the companies own and on the mortgage-backed securities they insure.

The selloff prompted Treasury Secretary Henry Paulson to announce Sunday that the government stood ready to buy the companies' shares or provide them with expanded credit lines. Paulson & Co. want to ensure that Fannie and Freddie can continue to support the mortgage market amid a flight of private investors from that arena.

Paulson's comments heightened concern that shareholders could be wiped out. Preferred stock shares that Fannie Mae issued in a May traded as low as 32 cents on the dollar Tuesday. Just a month earlier they had fetched three times that.

But the companies' common stock has bounced back over the past three days, following SEC Chairman Christopher Cox's announcement Tuesday that the agency would tighten the rules governing short sales of big financial stocks. Since then, shares in Fannie have nearly doubled and those in Freddie have jumped 80%, though both remain far below their highs earlier this year.

Raising new money could help to ease fears that government assistance will be necessary soon. Freddie has repeatedly noted that it is adequately capitalized by the standards of its regulator, the Office of Federal Housing Enterprise Oversight, and has plenty of cash on hand. The company said Friday it expects to be in compliance with OFHEO capital guidelines when it reports second-quarter numbers next month.

Still, skeptics note that at the end of the first quarter, when Freddie was also in compliance with OFHEO targets, it had just $16 billion in shareholder equity - a measure of net worth and the company's cushion against future losses - supporting more than $800 billion in mortgages and other assets.

The prospect of rising losses as house prices fall, together with the heavy use of leverage, has prompted critics such as hedge fund manager William Ackman - who is betting against the companies' shares - to propose that the companies be recapitalized.

Ackman's plan - which would certainly benefit him - would wipe out current shareholders and give holders of the firms' senior unsecured debt control of the reconstituted companies' equity, via an arrangement under which the bondholders would take a 10% haircut on their debt holdings and receive an equivalent amount of stock in the new companies.

Others believe Fannie and Freddie should be nationalized, wiping out shareholders and putting an explicit government guarantee behind the companies' obligations. But Treasury Secretary Paulson has said he believes the companies should continue to be shareholder-owned.

And even if the companies eventually need government aid, there could be a case for letting them keep their stock exchange listings.

Josh Rosner, principal at Graham-Fisher in New York, says he sees a parallel in the Chrysler bailout of the early 1980s, in which the government took warrants in the automaker in exchange for providing an emergency loan guarantee. When Chrysler returned to health later in the decade, the government was able to cash in the warrants, allowing taxpayers to share in the fruits of the company's recovery.

Bank failures: What you need to know