U.S. still a bargain for expats

American cities continue to get cheaper for foreigners while European cities get more expensive as the dollar drops, according to a new study. 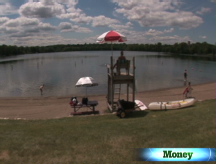 NEW YORK (CNNMoney.com) -- A falling dollar is making the United States a cheaper place for foreigners to live - just as other countries are getting harder on American wallets.

New York remains the costliest U.S. city to live in, according an annual survey of the most expensive cities on the world. But the Big Apple dropped seven places on the list to No. 22, as a weak greenback has helped make property and products cheap there compared to the rest of the world.

The survey, conducted by research firm Mercer, measures the cost of living for expatriates in 143 cities over countries in six continents.

For the third year in a row, Moscow was the study's most expensive city in the world, as the ruble strengthened against foreign currencies, and the Russian capital's accommodation costs soared.

Tokyo rose two spots to take over 2nd place, and London fell from number two to number three on the list.

"The dollar has been declining steadily for the past several years,' said Mitch Barnes, principal at Mercer in the United States, "Which has resulted in an overall decrease in the cost of living in 19 U.S. cities relative to other major global cities studied."

Global prices for Americans have increased as the U.S. dollar index, which measures the dollar against other global currencies, has fallen 14% over the past 12 months. The U.S. economy is also mired in a slowdown spurred on by a residential mortgage meltdown, an ensuing credit crisis and record energy prices.

But a declining dollar may help to encourage foreign businesses to invest locally.

"On the bright side, the U.S. dollar's loss of value may serve to attract globally mobile executives to business centers such as New York, Chicago and Los Angeles," said Barnes. "The difference in cost of living can be significant, particularly for those executives with families."

Furthermore, as the dollar declines, U.S. exports become more attractive to foreign importers. Accordingly, U.S. exports set 11 record highs in the past 12 months, according to the Commerce Department, helping to boost the nation's gross domestic product.

European cities continue to be some of the most expensive in the world, mainly as a result of the euro and other local currencies continued strength against the U.S. dollar. The euro hit a record high of $1.6038 against the dollar last week.

Many cities in developing countries also moved up the list in 2008. With a staggeringly high rate of economic growth, cities in countries like India and Brazil crept up the list. Riga, Latvia jumped 26 places to No. 46, New Delhi rose 13 spots to tie Los Angeles at No. 55, and Bogota, Colombia soared 25 spots to 87th place.