J.Crew's CEO says that this is the worst retail environment he's seen in 40 years in the business. His strategy? Take J.Crew upscale and launch a new brand called Madewell.

How J. Crew does luxe for less 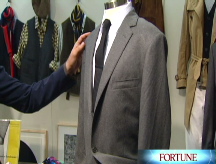 The sultans of style
Fortune's second annual Luxury Portfolio features the moguls, merchants and master craftsmen who are defining the business of luxury.
View photos

NEW YORK (Fortune) -- Is now the time for a retailer to go upscale? The guru behind clothier J. Crew thinks that's the right strategy.

J. Crew is relatively small - its entire retail square footage would fit into the space of just 13 Sam's Clubs - but CEO Mickey Drexler, the man who made Gap (GPS, Fortune 500) into a pop-culture phenomenon and reinvented retailing icon J.Crew, is closely watched in his industry. He says that the current retail environment is the worst he's seen during his 40 years in the business, and he's making a risky bet on upscale clothes and an edgy new brand. (This is an excerpt from a story in the Sept. 1 issue of Fortune. Read the full story.)

Part of what makes Drexler influential is his ability to predict not only what will sell but also how shopping habits are changing. What does Drexler's trend-spotting instinct tell him now? He thinks the dominance of the big-name designer is played out. He's stacking his chips on quality goods at a fair price, repositioning J. Crew (JCG) as a luxury-for-less alternative.

At the same time, he is launching his first new separate retailer since Old Navy. The fledgling Madewell chain - which has opened at ten locations, including New York City, Los Angeles, and Dallas - is aimed at the J. Crew customer's edgier siblings. Think jeans and boots rather than skirts and sweater sets.

"There is a great opportunity for J. Crew to pick up the Abercrombie & Fitch graduates. The children of the baby-boomers are three years away from getting into their 20s, and there are not a lot of retailers that are well positioned for that phenomenon right now," says Brian Tunick, a specialty-retail analyst at J.P. Morgan Chase. In fact, both Abercrombie & Fitch (ANF) and American Eagle Outfitters (AEO) have recently launched more adult lines, called Ruehl and Martin + Osa, respectively.

As confident as Drexler is, the timing is risky. While J. Crew is offering a better value proposition, it's going upscale at a moment when the average American consumer is scaling back on discretionary spending. Drexler sees the stagnant economy as not only a trial but also as an opportunity, a chance to steal business from department stores and brand-name designers. His logic is straightforward: Why can't an American retailer use the same Italian mills and fabric makers as European designers but then deliver a more affordable alternative to goods sold at department stores and boutiques?

"Designer goods have become much too available, either through their own distribution or through logo counterfeiting. I see the world moving away from carrying a bag around with the designer's initials or designer's logo," says Drexler. "The more you see of anything, the less special it becomes. It's kind of like the first slice of pizza vs. the sixth. The first you're like, 'God, this is amazing!' The sixth you're like, 'Enough already.'"

One way J. Crew is drawing attention to its higher-end men's wear is by opening the Liquor Store, a 935-square-foot space that was formerly a wood-paneled bar in New York's Tribeca neighborhood. In addition to suits, chinos, and desert boots, the store will sell vintage Timex watches, Redwing work boots and Mackintosh raincoats. The store will also sell a few Baracuta jackets (picture the windbreaker Steve McQueen wore on the cover of Life in 1963 and your dad wore raking leaves). J. Crew will also be offering men's shirts in fabrics made by Thomas Mason, the textile manufacturer that many Jermyn Street haberdashers use.

Long-term, Drexler's biggest challenge may be showing Wall Street the growth it craves. In May the company revised its earnings guidance for the rest of the year, projecting that comparable-store sales growth will be flat or in the low single digits, which sent the company's stock from $49 in May to $28 in August.

Since taking over, he has made great strides in pumping up two key metrics - sales per square foot and operating margins. J. Crew's 2007 operating margin was 12.9%, compared with the 7% to 8% average in its competitive set. Last year its sales per square foot were $569, well above the $400 average for the sector. That leaves J. Crew a few additional avenues of growth: build more stores, launch new brands, and stoke its fast-growing e-commerce.

Opening new stores would be the easiest way to show Wall Street growth, but Drexler doesn't want to go down the road that has led to so much grief for overstretched retailers from Gap to Starbucks. Right now J. Crew plans to open 36 new stores by year-end and close two underperforming locations, bringing its total to 301. Still, that's a small footprint compared with Abercrombie & Fitch's 1,000-plus stores or Banana Republic's roughly 550.

So should department stores or designers who slap logos on their clothing (and hefty markups on their customers) be worried about J. Crew? Industry watchers and retail veterans think Drexler may be onto something.

"There's an opportunity to capture customers who are looking to belt-tighten, looking for a little bit more value out of their apparel purchase," says Kimberly Greenberger, Citi senior retail analyst. But Greenberger cautions that going upscale could be a zero-sum game in which Drexler prices himself beyond the reach of the customers J. Crew already has. Says Greenberger: "We think consumers at every level are getting squeezed."

(This is an excerpt from a story in the Sept. 1 issue of Fortune. Read the full story.)