Behind the minimum wage debate

Some argue that a higher minimum wage leads to more unemployment. But with wages failing to keep up with inflation, some think more increases are needed. 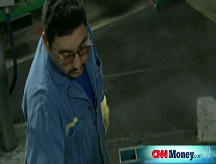 But some also worry about the impact of increases in the minimum wage and whether they will limit job gains in the future.

Talkback: Should the minimum wage be raised again?

Congress passed legislation last year that would raise the minimum wage in stages from $5.15 an hour to $7.25 in July 2009. (Several states already have minimum wages higher than that.)

"If labor becomes more expensive, employers will hire fewer workers," notes a study from the National Center for Policy Analysis, a research firm based in Dallas.

And this appears to be playing out with teenage workers. The unemployment rate for teens this August was 18.9%, up from 16.2% a year ago. Admittedly, teens make up a small percentage of the overall work force - a little more than 4%. But some think higher wages limit any job rebound, especially in a struggling economy.

"If the economy was in good shape, higher minimum wages wouldn't hurt the job market. But in a bad economy, it could serve as a brake to job growth," said Doug Roberts, chief investment strategist ChannelCapitalResearch.com, an investment firm based in Shrewsbury, N.J.

Of course, there is also a lot of merit to the argument that the minimum wage increase was long overdue - last year's boost was the first in a decade.

And it makes sense that with more Americans able to earn more from their paycheck, that could lead to increased spending and more robust economic growth down the road.

After all, an estimated 13 million workers (or 10% of the overall labor force) will receive a boost to their hourly wages once the minimum wage goes up again next year, according to the Economic Policy Institute, a think tank based in Washington.

And even with hourly wages rising about 3.6% year-over-year in August, that's not enough to counter current inflation trends.

So what should happen next for the minimum wage? It's an important question that is already part of the presidential race.

Democratic nominee Barack Obama is proposing that the minimum wage increase again, to $9.50 an hour, by 2011 and that further increases should be pegged to inflation.

Republican contender John McCain, however, is opposed to further minimum wage hikes. Instead, he's arguing that corporate tax cuts and better training programs for job seekers will be the key to higher wages.

There do seem to be clear positives and negatives to a higher minimum wage.

So is a higher minimum wage a driver of the current spike in unemployment, which stood at just 4.7% a year ago, or merely a coincidental factor?

It's hard to imagine that the unemployment rate would be significantly lower than it was now if the minimum wage hadn't changed since there are so many other big-picture reasons behind increased job losses.

Plus, one economist points out that many people that are losing jobs this year are more skilled workers in the hardest hit sectors of the economy, not people vying for entry-level positions.

"A lot of the job losses have been mainly in construction and manufacturing and the average wage levels in those industries are not anywhere near the minimum wage. Airlines is another industry with big job losses and higher paying jobs," said Keith Hembre, chief economist with First American Funds in Minneapolis.

Then again, if the minimum wage is increased to $9.50 an hour three years from now if Obama is elected and fulfills that campaign promise, then it's certainly fair to wonder if small businesses are able to withstand what would turn out to be a nearly 85% increase in the minimum wage in a span of just five years.

What do you think? Please comment about this topic on our Talkback page. And if I wind up getting a healthy response to this question, I hope to revisit this debate in a future column with the best of my reader's comments.

No job turnaround on the horizon