Washington Mutual CEO Killinger is out

The long-serving chief will be replaced by Alan Fishman, who formerly served as COO of Sovereign Bank. 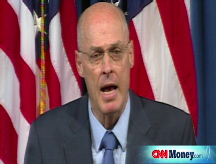 NEW YORK (CNNMoney.com) -- Kerry Killinger is out as CEO of Washington Mutual, the nation's largest thrift, according to the Wall Street Journal.

Killinger will be succeeded by Alan Fishman, who is chairman of Meridian Capital Group, a New York-based commercial mortgage broker, according to the paper. Prior to that, Fishman served as president and chief operating officer of Sovereign Bank (SOV, Fortune 500), which is the nation's second-largest thrift and based in Philadelphia.

Wamu's shares have lost 85% of their value in the last year, and Killinger has said that the company could sustain losses of between $12 billion and $19 billion, according to the Journal. The thrift does a lot of business in states that have seen housing prices fall sharply, and holds over $50 billion in risky option adjustable-rate mortgages.

In April, the private equity firm TPG (formerly Texas Pacific Group), led a $7 billion capital infusion into Wamu (WM, Fortune 500), according to the paper, and some analysts believe the thrift will need more than that.

Throughout the turmoil, the company's board backed Killinger, who has been at the helm since 1990. But in June he was stripped of his title as chairman.

Fishman will receive a $10 million signing bonus including $2.5 million in performance based stock awards, according to the Journal, as well as a salary of $1 million and options to buy five million shares.

Killinger will retire with no extra severance benefits, the paper reported. He currently has $5.2 million in common stock, $14.9 million in deferred compensation and $3.5 million in pension benefits.