Images show GM engineers and executives with a production version of the GM electric car. 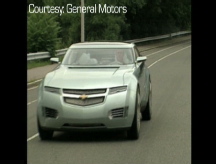 GM executives, engineers and designers, including vice president for product development Bob Lutz, are shown standing with the car.

The photos were released accidentally, a GM spokesman said.

GM (GM, Fortune 500) had been hoping to keep the images under wraps until the car's official unveiling, which is expected later this month.

GM regularly uses the Volt concept car in its advertising, noting that it is a "future product."

During the Volt's development, the carmaker has allowed an unusually high degree of access to the media. Over the past year, GM has even invited journalists into its design and engineering center to see work on the car.

Based on the new photos, the front end of the production version of the Volt looks more rounded than that of the concept car first shown by GM at the 2007 Detroit Auto Show.

The concept car's angular face wasn't aerodynamically efficient enough to make it to the final version as GM engineers and designers tried to extract every extra foot of "all electric" range from the car, GM designers have said.

The back end of the car will have a sharp, angular shape. In the rear, where air flows together as it trails off from the vehicle, sharp angles help smooth air flow.

The Volt will be driven by electricity stored in a large T-shaped lithium-ion battery pack running the length of the car, according to information released earlier this year by GM.

After charging for several hours, the Volt will be able to run for up to about 40 miles without using gasoline.

As the battery begins to run down, a small gasoline engine will turn on, generating enough electricity to drive the car to a full range -- expected to be about 300 miles.

The gasoline engine will not drive the car directly but will generate electricity which will be routed through the battery pack to drive the wheels.

The Volt will seat four, not five as some other cars its size can, according to GM. The space required by the battery pack would not allow for a center seating position in the back.