By taking control of Fannie and Freddie, the Treasury Secretary risks making it harder for other troubled financial firms to raise money. 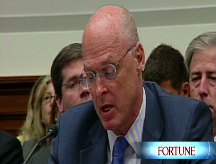 Author, TV host, and the founder of Martha Stewart Omnimedia answers your questions in the Dec. 8 issue of Fortune.

Now's your chance to ask Stewart about launching your own company, how the market turmoil has impacted her empire, and whats next for the titan of homemaking?
Previous Q&As

NEW YORK (Fortune) -- Treasury Secretary Henry Paulson has tamed the two-headed housing-market beast known as Fannie Mae and Freddie Mac - but not without adding to the uncertainty swirling through the financial sector.

Paulson announced plans Sunday to put Fannie (FNM, Fortune 500) and Freddie (FRE, Fortune 500) under government custody, including replacing their CEOs, ending common and preferred dividends and creating a new class of preferred stock that will be senior to existing shares - meaning existing shareholder stakes were made less valuable.

The move aims to assuage bondholders' fears about the creditworthiness of the companies, and to persuade the foreign central banks that have been big buyers of Fannie and Freddie bonds that their investments are safe.

If investors buy into Paulson's program, mortgage rates should fall because Fannie and Freddie's borrowing costs will fall. That, in turn, could lessen the steepness of the decline in home prices.

But with the economy slowing and the U.S. financial system under severe stress from the collapse of the housing bubble, it's not clear that even full government backing for Fannie and Freddie will bring mortgage rates down substantially.

And, Monday's financial sector rally notwithstanding, Paulson's action carries risk: By raising questions about the terms on which the government intervenes with companies deemed too big to fail, Sunday's action could reduce access to private capital for struggling financial firms.

That the markets had their doubts about Fannie and Freddie is no secret. The 90%-plus plunge in their shares over the past year shows there was substantial doubt about the companies' finances over the long haul.

Yet Sunday's placement of Fannie and Freddie under government ownership nonetheless came as something of a surprise. In contrast to Bear Stearns, the brokerage firm that ran out of cash in March and was dashed off in a Fed-brokered fire sale to JPMorgan Chase (JPM, Fortune 500), Fannie and Freddie had plenty of cash on hand and weren't on the verge of collapse.

Indeed, though critics of Fannie and Freddie have long warned that the companies were too thinly capitalized - they hold or guarantee $5.4 trillion of mortgages, on less than $100 billion of capital - the government's own oft-repeated position, until Sunday, was that Fannie and Freddie would be able to continue in their mission of providing liquidity to the housing market without the feds riding in to the rescue.

Paulson himself said in July he didn't expect to have to use the authority Congress was handing him to buy shares or debt in the companies. What's more, Fannie and Freddie were deemed well-capitalized that month by their regulator, James Lockhart, who at the time headed the Office of Federal Housing Enterprise Oversight and now runs its successor, the Federal Housing Finance Agency.

What was most surprising about the timing of the government intervention was that the rules governing the FHFA's relationship with Fannie and Freddie - rules adopted only in July, with the passage of legislation creating the agency as a new "world-class regulator" for the companies - specify the terms of a government intervention. The rules say the companies must fall below certain capital thresholds for the government to have the right to take them into a conservatorship.

Paulson didn't make any substantive comment about the companies' capital levels at his press conference Sunday. And while the FHFA is expected to release a report on the companies' capital standing soon, there has been no official finding that their position is inadequate, even though Lockhart hinted in his statement Sunday that the companies' capital had been found wanting. He spoke of "frank exchanges regarding loss projections, asset valuations, and capital adequacy" with the top officials at Fannie and Freddie.

If the rules governing federal intervention aren't clear, investors may become more wary of committing funds in what is already a difficult situation in the financial sector. Among the firms that have sold various flavors of preferred stock to bring in new money are Lehman Brothers (LEH, Fortune 500) , AIG (AIG, Fortune 500), Citi (C, Fortune 500) and Bank of America (BAC, Fortune 500), to name just a few. Firms seeking new capital like to issue preferred shares because they appeal to investors by paying substantial dividends and rank above common shares in terms of their claim on the earnings of the issuer.

Brother, can you spare a billion?

After spending billions of dollars to recapitalize U.S. firms on the assumption the market would soon rebound, and then seeing the value of those investments slide, big sovereign wealth funds and other deep-pocketed players already appear to be growing wary of making the same mistake twice.

Merrill Lynch (MER, Fortune 500) succeeded in July in selling $8.5 billion in new common stock, but it has been practically alone among the big firms in raising new money this summer.

Lehman Brothers, for instance, has been spanning the globe in a pitch for new capital - with little to show for its efforts.

Paulson insisted at his announcement Sunday that Fannie Mae and Freddie Mac, as government-sponsored entities, are different than other financial firms, and that investors shouldn't take too much heed of what may happen in the market to preferred shareholders there.

"By stabilizing the GSEs so they can better perform their mission, today's action should accelerate stabilization in the housing market, ultimately benefiting financial institutions. The broader market for preferred stock issuance should continue to remain available for well-capitalized institutions."

He had better hope so, because investors, not Paulson, will be the ones to make that decision.