Prices edge lower even as Tropical Storm Hanna dumped heavy rain up and down the east coast. Prices remain 83 cents above year-ago levels. 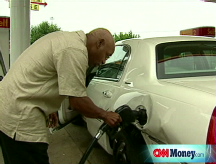 With Hanna gone, Hurricane Ike is now front and center and on a path toward the Gulf of Mexico. The Category 2 storm could regain strength as it heads toward the Texas/Louisiana border, according to the latest hurricane center track map. Gas prices eased in both those states. Prices also slipped in the Carolinas and Georgia.

Nationwide, Alaska and Hawaii remained the two states with gas prices still tracking above $4 a gallon. The cheapest gas was now found in New Jersey, where prices averaged $3.431 a gallon.

Meanwhile, Gas has fallen about 46 cents from the record high average of $4.114 that AAA reported on July 17, but they are still 83 cents above this time last year.

Also, Americans had cut back on driving during the typically heavy traffic summer months. In fact, demand for gas dropped off by 3% to 4% during the June-to-August period and driving decreased during the same time frame. It remains to be seen whether the trend will hold.