The economy isn't doing as badly as you think. It just feels that way. 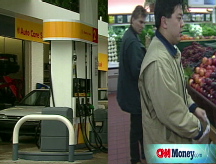 America: Better off and worse off
It's been seven years since the last recession. Times are tough once again, and people are telling us how they're doing.
View photos

(Fortune Magazine) -- The recession is no doubt hurting you, perhaps badly. Your sales may well be down. Maybe you've even lost your job. Whatever your troubles, you may safely blame them on the recession.

After all, most of the CFOs questioned in a recent poll agree that the U.S. is in a recession; among the general public, 76% said the U.S. was in a recession six months ago, and other polling suggests most people believe things have grown worse since then.

The government takeover of Fannie Mae and Freddie Mac, its rescue of insurance giant AIG (AIG, Fortune 500), the collapse of Lehman Brothers, and this week's hair-raising plunges in the Dow reinforce the sense of economic collapse. Even the No. 1 album on iTunes recently was Young Jeezy's The Recession. When hip-hop chart toppers are talking about the economy, something big is going on. The recession is everywhere.

Just one problem: There isn't any recession. The latest figures show that we clearly were not in one as of midsummer, whether you use the rule-of-thumb definition - two consecutive quarters of GDP shrinkage - or the looser concept of a sustained and significant economic decline.

The economy shrank marginally (-0.2%) in the fourth quarter of 2007, but otherwise it's been growing steadily for years. In the most recent quarter it grew at a vigorous 3.3%, fueled not by government stimulus checks but by a strong rise in net exports. The OECD has just raised its forecast of U.S. growth for the full year from 1.2% to 1.8% - not blistering, but still the fastest growth of all the G-7 countries.

Talkback: What do you think?

So if we're not in a recession, why does everyone think we're in one? Partly it's because in a global economy, it's possible to produce economic growth that many people don't feel. The rewards of economic growth are going disproportionately to those with the best educations, bypassing many of the more numerous workers without college or higher degrees. In some cases, well-educated workers like teachers have also missed the rewards of growth. Even a company's stock price that rises with global growth doesn't benefit Americans as much as it used to, because ownership is dispersed much more widely around the world than before.

A more profound reason that people believe we are in a recession can't be found in the GDP tables at all. It's in their minds, what psychologist and author Judith M. Bardwick calls the psychological recession - "an emotional state in which people feel extremely vulnerable and afraid for their futures."

The No. 1 cause, she says, is not falling incomes - most people's incomes aren't falling - but rather people's worry about job security, "the mother lode of anxiety poisoning their view of reality." Even if they keep their jobs, they know that benefits may well be cut. Then add the lack of confidence in financial institutions and market swoons that have eaten into investors' portfolios.

What's so insidious about it, she says, is that "as people try to gain some sense of having control through knowledge, they increase their fears and sense of vulnerability by seeking out and therefore exaggerating the bad news. In this way the psychological recession is self-fulfilling."

So the feeling of vulnerability trumps the statistics. After all, not only is the economy growing, but the unemployment rate, now 6.1%, is still not high by historical standards (after the 1990--91 recession it hit 7.8%, and after the 1982 recession it hit 10.8%). Yet it doesn't matter. People fear that in a fast-moving global economy, they could lose their jobs at any time for reasons beyond their control, and that worry about their own situations feeds pessimism about the economy overall. If I'm afraid that my sky may be falling, then the sky itself is falling.

That insight is critically important in the presidential race. Consider the 1992 election: The last recession had been over for 18 months, and President George H.W. Bush campaigned by asserting that the economy was growing smartly. But the psychological recession, stoked back then by corporate restructuring, was still going strong. Bill Clinton understood that and campaigned by telling voters he felt their pain. Bush was right, but Clinton won.

In this election it's clear that Barack Obama has learned the lesson of 1992; he's feeling voters' pain around the clock. John McCain isn't. Instead, he's telling Americans that the economy isn't as bad as they think. He needs to change that message - unless, like Senator Henry Clay, he'd rather be right than President.

Talkback: What do you think? Has our economy slid into a recession, are we in one now, or are we headed for one? Why or why not? Tell us what you think.

The power of Paulson