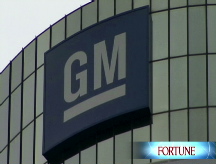 NEW YORK (Fortune) -- Investors cast a shocking vote of no confidence in the future of U.S. automakers Thursday.

A flurry of bad news was to blame for Thursday's selloff, of which the latest was a declaration by ratings agency Standard & Poor's that it was putting GM and Ford on credit watch negative "because of the rapidly weakening state of most global auto markets" and weak capital market conditions.

GM said in a statement Friday that bankruptcy protection was "not an option."

But the stock plunge effectively puts both companies on death watch, and it's easy to see why. The ratings warnings followed a new report by Global Insight that shows U.S. auto sales hitting recession levels this year - and then sinking lower in 2009.

"We won't get back to where we were in 2006 until 2013," said George Magliano, director of forecasting for North America for Global Insight. The economic forecasting and consulting firm based outside Boston is forecasting sales of 13.8 million units this year and only 13.4 million in 2009, compared with 16.1 million last year.

The impact of oil prices at the beginning of the year was mild compared to the squeeze from the credit crunch. As Nigel Griffiths, Global Insight's managing director of global forecasting, points out, expensive oil merely meant that wealth was being transferred to oil-producing countries like Russia from oil-consuming ones like the United States. Now, the credit crunch is destroying wealth and making it impossible for customers to buy.

"The impact is worse than if the price of oil had been sustained at $200 a barrel," he said.

No help from foreign markets

It turns out that auto finance companies were as guilty as mortgage lenders in providing loans to subprime borrowers - and their generosity is coming back to haunt them. Lenders dramatically cut standards for credit worthiness at the beginning of 2008 and now delinquency rates have been shooting up to levels not seen in 30 years.

"Some 18% of sales volume came from people with bad credit scores," said Magliano. "Now the subprime buyer has been squeezed out."

There is little relief overseas. According to Global Insight, at least half a dozen countries in Western Europe experienced greater house-price appreciation over the last 10 years than did the United States. Ireland led the way with a nearly 250% rise and the United Kingdom was not far behind. With that kind of wealth accumulation unlikely to be repeated, sales experienced a "total collapse" in July and have gone into a "violent downshift."

Nor is Asia likely to provide a safety net. Sales growth in China is slowing markedly and vehicle demand in India is also ebbing. Even the much publicized $3,000 Nano car developed by India's Tata Motors is off to a slow start. Plans for an assembly plant in India have been scuttled by local opposition and Global Insight says Nano "will only see a big build-up in volumes from 2010."

"When will the credit crunch free up enough to allow consumers to finance again?" asked Griffiths. "That is the several-trillion-dollar question. It is the core assumption on which all forecasts will be based and it is unforecastable."

To combat this flood of negative news, GM has adopted the Sarah Palin approach: bypassing the media by communicating directly with customers and investors. GM executives can now be seen in videos posted on its Fast Lane Web site talking about the company.

In the first video, posted Sept. 22, chairman and CEO Rick Wagoner responds to the question "What's GM's future look like?" by saying "GM's future is actually quite bright." After ticking off progress on new models, technology and sales in developing markets," he concluded by saying, "though times are challenging, we're really making sure that we keep planting the seeds for what we think should be a very exciting future for General Motors."

Three weeks later, you have to wonder what he'd be saying today?