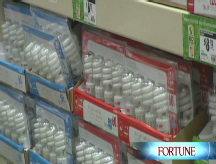 The nation's second-largest retailer said the weak consumer environment will push sales down by as much as 8% for the current fiscal year. That's greater than the 5% drop the company previously expected, and a bigger sales decline than analysts' forecast of 6.5%.

"The housing and home improvement markets remain challenging," said Frank Blake, chief executive of Home Depot on a conference call with analysts. "Customers are finding credit harder to come by, and we expect those pressures to continue through the fourth quarter of 2009."

Home Depot said it expects earnings per share for all of 2008 to fall about 24% from the previous year, which is in line with previous guidance and analysts' expectations.

The Atlanta-based retailer reported revenue of $17.8 billion, down 6.2% from the third quarter of 2007 but just slightly more than analysts' forecast of $17.7 billion. Overall revenue was dragged down by total sales at continuing operations - stores that have been open for at least a year - which fell 8.3% in the quarter. U.S. comparable store sales fell 8.4% last quarter.

The Home Depot (HD, Fortune 500) is facing battles on many fronts. With the economy likely in a recession, consumer confidence and spending have fallen substantially over the past several months.

Consumers have recently deferred spending on big-ticket items and expensive projects, as they remain concerned about debt spending in the midst of a credit crisis. Furthermore, the battered housing market continues to decline, dragging construction projects down with it.

Big-ticket purchases that cost more than $500 fell by more than 10% in the past three months, dragged down by purchases of special-designed kitchens, which dropped 30%.

The average price of a sale at the company's registers fell 2.8% to $55.86 in the quarter from $57.48 a year ago. The company said that lower appliance sales alone dragged down sales by 17 cents per transaction.

That's an ominous sign ahead of the holiday season, which tends to thrive on sales of expensive items at the end of the year. On the conference call, Carol Tomé, Home Depot's chief financial officer, said the fourth quarter will remain very challenging for consumers, who will likely focus on lower-ticket items like energy-efficient products and basic repair tools.

To adjust to the weak environment, the company unveiled a new lower-price advertising campaign last quarter and lowered in-store inventory by 7.5%.

"Across our entire business, we are making the adjustments necessary to respond to a tough market environment," said Blake.