The president-elect and Congress will be kicking off the New Year with big plans -- and no time to waste. Here's the immediate to-do list. 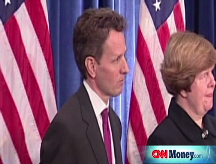 NEW YORK  (CNNMoney.com) -- Considering the work ahead, it's likely that the fabled first 100 days of a new presidency will be highly compressed for President-elect Obama and the new Congress.

With so much at stake for the United States and the global economy, the demand will be great for substantive action during January, a month normally reserved for procedural necessities that establish the new administration.

Between Jan. 6, when the 111th Congress begins, until Jan. 20, when Obama takes office, lawmakers will be scrambling to hold hearings, write major legislation and oversee a string of unprecedented and controversial financial rescue packages.

Then after Obama is sworn in, action is expected on a number of fronts before the month is out.

"A lot of houses are on fire. Everyone is going to be looking to the president for decisive action," said Terry Sullivan, executive director of the White House Transition Project and an associate professor at the University of North Carolina at Chapel Hill.

Here are four key things that Obama and lawmakers will have to face in the first month of the new year:

Given the economic crisis the Obama administration will face on Day 1, lawmakers are expected to act immediately to confirm the next president's cabinet nominees.

The Senate may not confirm all of Obama's cabinet members on Inauguration Day, "but a very substantial number of them," said Norman Ornstein, a resident scholar at the American Enterprise Institute.

Indeed a Senate Democratic leadership aide told CNNMoney.com that "there is a possibility that we'll be able to do a handful by Inauguration Day."

Ornstein and other experts said they expect at the very least the nominees for key economic and security cabinet posts will be confirmed right away.

"Generally [the transition team] works it through before with committees' staff and leadership along with Senate leaders that [the nominee] won't have trouble getting confirmed," said Lynn Jennings, executive vice president of the Council for Excellence in Government.

Speedy confirmations are not without precedent. Eleven members of President Bush's cabinet, for example, were confirmed on Jan. 20, 2001, according to the Council for Excellence in Government.

Following confirmation of the remaining cabinet members, the goal then will be to get the top 100 players in each area confirmed, Ornstein said. "It's really important to get those moving."

The Obama team isn't putting a price tag on its economic stimulus plan, which Democratic leaders want to have ready for the new president to sign either on or very soon after Inauguration Day.

Currently, the initial package is expected to cost somewhere between $500 billion and $700 billion over two years.

On the likely agenda: Funds for infrastructure projects, middle class tax cuts, aid to state and local governments, and money for safety net programs such as food stamps and Medicaid.

Obama described the package as "the largest infrastructure program ... since the building of the Federal Highway System in the 1950s."

Infrastructure is likely to be the most controversial measure. Many critics say such funding isn't the best way to jumpstart economic activity in the near-term because many infrastructure projects take too long to get under way.

A recovery package also might include an extension of the increase on the maximum loan amounts that qualify mortgages for backing from Fannie Mae (FNM, Fortune 500), Freddie Mac (FRE, Fortune 500) and the Federal Housing Administration, a measure that House Financial Services Chairman Barney Frank, D-Mass., is advocating. On Jan. 1, the limit will drop to $625,500 from $729,750 in the highest-cost housing markets.

It's still not clear whether Treasury Secretary Henry Paulson will ask for the remaining $350 billion of the $700 billion Congress authorized to stabilize the financial system under the Troubled Asset Relief Program.

Paulson would need congressional approval and Democratic lawmakers are not pleased that all of the money allocated so far has gone to capitalizing financial institutions -- money offered with fewer strings attached than they would have liked.

Frank said this week that until Treasury uses the TARP money to help prevent foreclosures, Congress is not likely to release the funds to Paulson or his successor.

Obama has promised to put a mortgage-relief plan in place, although he hasn't specified what that plan will look like yet.

To get congressional support, "we believe the Obama administration will get the final $350 billion by endorsing the FDIC mortgage modification program," said financial services analyst Jaret Seiberg of the Stanford Group, a policy research firm.

That program -- estimated to cost just $25 billion and to help 1.5 million homeowners -- would be similar to a loan modification program initiated at IndyMac after the FDIC became the bank's conservator this summer. But there would be added incentives for servicers to modify more loans, such as a government promise to help pay servicers' modification costs and guarantee half of the losses that occur should borrower re-default on the modified loan.

If Congress and President Bush agree to offer General Motors (GM, Fortune 500) and Chrysler LLC $15 billion in bridge loans to get them through early 2009, lawmakers will be keeping close tabs on the automakers' financial health.

If the companies successfully adhere to the terms of the loan - which would force them to make tough decisions to foster long-term viability - lawmakers will need to start thinking about the next steps in their efforts to aid the companies. Economist Mark Zandi testified last week that it may require between $75 billion and $125 billion to keep the companies in business for the long-term.

If they don't, then lawmakers will need to address what economists and others have been warning could be the fallout should GM or Chrysler go under: a spike in the jobless rate and a steep reduction in income tax and auto sales tax revenue.

$1 trillion rescue: Not so far fetched