An angry mob of investors and taxpayers is assembling, and they want to see some executives' heads on pikes. The question for the courts will be, Who was just foolish with our money - and who was lying, cheating, and stealing? 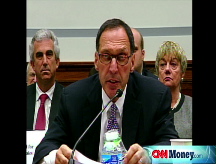 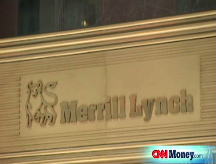 Three days that shook the world
The most powerful people in American capitalism convened on September 12 to try and save Lehman Brothers. Three months later, it is clear that the egos, passions and prejudices of the participants in those meetings have reordered the American business landscape.
View photos
Fannie's $29 billion loss 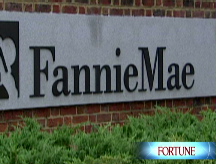 (Fortune Magazine) -- In today's dire financial climate, what exactly should a CEO say when it's time to hold that quarterly earnings call with analysts and the media?

On the one hand, he could try refreshing candor and say, "Look, let's be honest. This sucker could go down." The problem with this approach is that it tends to ensure that the company will indeed go down - that afternoon. The stock price will plummet, lenders will call in their loans, banks and customers will freeze the company out, credit agencies will downgrade it, and soon our commendably honest CEO will notice a half-dozen satellite television trucks - those modern-day vultures - double-parked outside the lobby.

Or there's Plan B. The executive could exude confidence and willfully paint a disingenuously rosy picture featuring lots of gilded lilies. The problem with this tack is that, while it might get the company through a rough patch, the executive is certainly committing civil fraud, and if the company crashes and burns anyway, he may also go to prison.

It's no defense for an executive who bends the truth to say that he did so only to prevent a run-on-the-bank-type situation, says one criminal-defense lawyer. (The lawyer requests anonymity because in this climate, he notes, such an on-the-record statement might lose him some business opportunities.) Even if the executive thinks that short-sellers are spreading lies about his company, he can't respond in kind. If he does, this lawyer says, "he's betting the farm. He's betting his life."

Today's crisis has placed under the forensic microscope scores of reassuring assertions made by CEOs and CFOs during earnings calls or "investor day" gatherings or breezy, on-camera flirtations with Maria Bartiromo that have proved, sometimes within hours, breathtakingly off the mark. Were the officials honestly relying on flawed business models - or lying through their teeth?

It's not just the Securities and Exchange Commission, New York State attorney general Andrew Cuomo, and hordes of civil plaintiffs lawyers who want to find out. According to understated disclosures in SEC filings or newspaper reports, federal criminal prosecutors in Manhattan, Brooklyn, Newark, Los Angeles, San Francisco, Seattle, and Alexandria, Va., are all poring over e-mails and other records right now trying to answer that question in regard to high-level officers at such formerly blue-chip companies as Lehman Brothers, AIG, Washington Mutual, Countrywide Financial, Fannie Mae, and Freddie Mac.

To be clear, we're not talking here about sensational, not conceivably legal, out-and-out Ponzi schemes, like the $50 billion one that former Nasdaq chairman Bernard L. Madoff has been arrested for, or brazen forgery and criminal impersonation, like the $100 million spree that glitzy New York litigator Marc S . Dreier has been accused of. Crimes like those typically have only one of two defenses: (a) "It wasn't me," or (b) "Okay, it was me, but I was sleepwalking on Ambien at the time." This article is, rather, about an entirely different category of accusation. The probes being discussed here concern statements that ultimately proved incorrect, but which reasonable, straight-faced people can, and vigorously do, contend were honest when made.

The level of fury surrounding these inquiries is of a different order from what we saw with, say, the backdating scandals or the Enron and WorldCom failures. Today's credit collapse has already vaporized about $9 trillion in investment capital, while ripping another trillion in assorted bailout money from the pockets of enraged taxpayers - also sometimes known as "jurors."

So there's an angry mob with pitchforks assembling, and they want to see some heads on pikes. While former Enron CEO Jeff Skilling could at least try to have his case transferred out of Enron-devastated Houston, the credit-crisis targets will have no such card to play. This time the corporate shenanigans have wrecked the globe. "This is the ugliest enforcement environment I've ever seen in my professional career," says one criminal- defense lawyer, who also asks for anonymity.

"People are hot," observes John Dowd, who heads the white-collar unit of Akin Gump Strauss Hauer & Feld. "It can get toxic pretty quickly."

People have a right to be angry, but anger is not the best frame of mind in which to mete out due process. Here, the process that is due requires distinguishing foolish mistakes from lies and fraud - a line that can get surprisingly fine. To the chagrin of John Q. Public, there will be serious defenses in most of these cases.

To begin with, bad business models - even business models that in retrospect look like prescriptions for disaster - are not crimes as long as they are fully disclosed to investors. And the fact that lenders were hawking outlandishly risky mortgages to people who were terrible credit risks was, in fact, no secret in America: It was bipartisan national policy. The fact that exotic mortgages (like "pick a payment option" AR Ms and "Alt-A" loans with no documentation of the buyer's assets or income) were then being packaged into complex derivative securities - some rated AAA by Moody's, S &P, and Fitch - was not just well known but also hailed as ingenious by some of the putatively best financial minds in the country.

If CEOs did not foresee the imminent train wreck that, looking back, seems so inevitable, neither did former Federal Reserve chairman and erstwhile "maestro" Alan Greenspan, who has recently, if self-servingly, termed our predicament a "once-in-a-century credit tsunami."

Accordingly, Carl "Chip" Loewenson Jr., cohead of Morrison & Foerster's white-collar defense unit in New York City, sees an impending collision of two powerful opposing forces. "No one - not Fannie, not Freddie, not Lehman, not AIG, not [SEC chairman Christopher] Cox, not [Federal Reserve chairman Ben] Bernanke - thought it would get as bad as it has gotten," he says. "This weighs against proving criminal intent.

"On the other hand," Loewenson continues, "there is a long populist tradition in our country that insists on finding villains in any economic downturn."

The job of the prosecutors is not to ferret out the root causes of what went wrong with the economy. That's a task for historians. The prosecutors are to look for unambiguous, intentional wrongdoing - and since a lay jury will be the official scorer here, the simpler the wrongdoing, the better. While it might be true, for instance, that investors were misled by the way companies handled mark-to-market accounting of derivatives, a prosecutor who makes that the centerpiece of his case will end up with a swearing contest between opposing accounting experts - a morass in front of a jury.