The most powerful people in American capitalism convened on September 12 to try and save Lehman Brothers. Three months later, it is clear that the egos, passions and prejudices of the participants in those meetings have reordered the American business landscape. 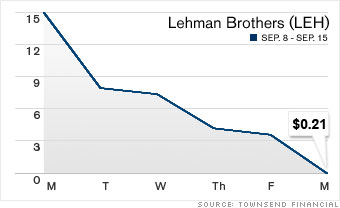 As Lehman Brothers tried to find a way out of a liquidity death spiral, Henry Paulson, the Treasury Secretary, and Christopher Cox, the Chairman of the SEC, flew up from Washington for a six o'clock meeting with then-New York Federal Reserve chief, Timothy Geithner at the New York Federal Reserve Bank's Italianate palazzo in lower Manhattan. Going into the weekend, Lehman had two potential suitors - Bank of America and Barclays.

With Geithner at his side, at 6:15 P.M, Paulson stood before CEOs and their top deputies from Goldman Sachs, Merrill Lynch, Morgan Stanley, JPMorgan Chase, Citigroup, Credit Suisse and other firms and delivered a harsh message, according to a source there. "There will be no bailout for Lehman," Paulson said, "The only possible way out is a private-sector solution." Wall Street's top execs had to come up with a plan in 48 hours to save Lehman from insolvency or suffer the consequences of a catastrophic unwind of the Gordian knot of Wall Street's complex and internecine financial relationships. Read more.
By William Cohan, contributor
NEXT: Bank of America bows out
Last updated December 16 2008: 4:23 PM ET
Email | Print |