Venezuelan oil giant Citgo decides to continue the program two days after it was put on hold. 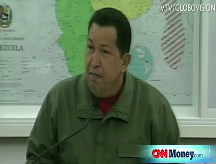 NEW YORK (CNNMoney.com) -- Venezuela's Citgo Petroleum said Wednesday that it has reinstated a program that provides discounted home heating oil to lower-income residents in U.S. communities, two days after it was suspended.

Granado said the decision to continue the program was in response to "the current global financial crisis and its impact on the oil industry in general."

On Monday, the program was put on hold so that Citgo could re-evaluate its social programs in light of the global economic slowdown and falling oil prices.

The abrupt reinstatement of the program appears to have come at the behest of Venezuelan President Hugo Chávez.

"Evidence of this is that President Chávez wanted all necessary efforts made to ensure the continuation of the program, so that its recipients will not be disappointed," said Joseph Kennedy, chairman of Citizens Energy Corporation, the non-profit company that oversees the program.

The joint program drew its share of skeptics when it began in 2005. Some accused Chávez - a frequent U.S. critic who called President Bush "the devil" in a 2006 U.N. speech - of using the heating oil program as a public-relations tool for his country.

However, Kennedy said the decision to continue the program reflects Chavez's "genuine concern for the most vulnerable, regardless of where they may live."

"This decision is a clear, direct message from President Chávez of his desire to strengthen relations between his country and the United States, particularly at this time, when a new U.S. administration is scheduled to be sworn-in within the next few weeks," Kennedy added.

The program provides fuel for 200,000 households in 23 states, according to Citgo.

An earlier version of this story misstated the day that Citgo suspended its program. CNNMoney.com regrets the error.