Regulators should earn more than bankers -- at least that's what several regulators from Europe and Asia have been saying at Davos. 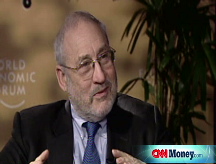 (Fortune) -- Here's a simple idea to prevent Wall Street meltdowns from happening again in the future, brought to you courtesy of the World Economic Forum in Davos: Start paying regulators much, much better.

Several financial market regulators from Europe and Asia say they think one of the reasons that Wall Street shenanigans including the Madoff alleged fraud were allowed to continue unchecked for so long is because staffers at the Securities and Exchange Commission and other U.S. market watchdogs earn so much less than the bankers, fund managers and other people they are supposed to be policing.

"You need good career people to do this job, and if you want good people who make a career of it, you need to pay them properly," says Howard Davies, the former head of Britain's Financial Services Authority who now heads the London School of Economics. "In the U.S., they don't -- and they have got it wrong." he told Fortune.

The same message comes from Tony Tan Keng-Yam, a former top Singapore government offical who currently heads the Government of Singapore Investment Corporation. Singapore created a special civil service pay scale for its market regulators. Top people there can earn the equivalent of over $1 million annually. The same is true in Hong Kong. In London, meanwhile, heads of departments at the FSA earn more than the equivalent of $250,000 annually. "The people who work in the regulatory agencies need to be as good as the people in the market itself," Tan Keng-Yam said.

The SEC was long at a particular disadvantage because it paid its staffers less than those at other federal regulatory agencies. That was changed in 2002, but SEC staffers who earn more than $100,000 remain the exception.

That's a fraction of what many bankers on Wall Street earn. There is, of course, one big advantage to being a regulator, especially at troubled times like these: relative job security. Davies says the FSA in London is currently flooded with resumes.

At Davos, an upside-down world