Bonds rally as stocks get hammered

Investors brace for spate of reports and Fed's semi-annual meeting on the state of the economy. 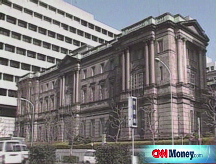 Both the Dow and the S&P 500 tumbled to 1997 levels as investors continue to worry that the government's efforts to slow the recession won't be sufficient.

Jitters about the pace of an economic recovery helped prop bonds higher, especially as investors await a slew of economic reports due out this week.

If this week's reports are negative, recovery expectations could be pushed to 2010, said William Larkin, portfolio manager at Cabot Money Management.

"A veil of negativism swept into the market and that will continue, pushing bonds a bit higher," he said, adding that market participants are concerned about bailouts and overspending in Washington.

Investors are bracing themselves ahead of Federal Reserve Chairman Ben Bernanke's semi-annual report on fiscal policy and the state of the economy to Congress on Tuesday and Wednesday.

"We're expecting a cold reality to come out of that meeting," Larkin said. "There's definitely a nervousness in the market."

The Wall Street Journal, citing sources familiar with the matter, reported that the government would convert a large portion of its preferred Citigroup (C, Fortune 500) shares to common shares.

That would require the Treasury Department to issue even more government bonds on top of the record amounts it is issuing this year to finance its economic and financial rescue plans. With $787 billion it will owe for stimulus, $700 billion for the bank bailout and trillions more in liquidity programs, the Treasury expects to issue between $2.7 trillion and $4.2 trillion of debt over the next two years.

This week, Treasury plans to auction off a record $94 billion in 4-week, 3-month and 6-month bills.

But earlier this year, bonds went on a month-long losing streak amid supply concerns. Some analysts think the market could head lower again, as more government borrowing could push supply of bonds beyond investors' demand for them.

The yield on the 3-month note stood at 0.28%. Demand for the shorter-term note is seen as a gauge of investor confidence.

Libor, the London Interbank Offered Rate, is a daily average of rates that 16 banks charge each other to lend money in London.

Two credit market gauges showed an uptick. The TED spread fell to 0.97 percentage points, down slightly from 0.98 Friday. The bigger the TED spread, the less willing investors are to take risks.