Obama is relying even more heavily on mortgage finance agencies Fannie and Freddie to help troubled borrowers and keep the housing market afloat. 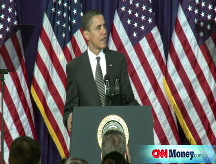 President Obama is leaning heavily on the teetering mortgage finance titans to help stabilize the housing market, even as it pumps hundreds of billions of dollars into them to keep them afloat.

As the housing crisis deepens, the question of the companies' long-term future has been set aside.

"The Obama administration has indicated that Fannie and Freddie will continue having a key role in the nation's economy as we go forward," James Lockhart, director of the Federal Housing Finance Agency, which regulates the companies, said in a speech last week. "At this point, our primary focus has to be getting through the present crisis."

Fannie (FNM, Fortune 500) and Freddie (FRE, Fortune 500), which long straddled the line between private companies and government agencies, were taken into conservatorship last September to prevent their collapse. Each were given a lifeline of $100 billion.

Their importance to homebuyers and lenders is clear - they accounted for more than 75% of mortgage originations at the end of last year, injecting much-needed financing into the lending arena. They own or guarantee almost 31 million mortgages worth $5.3 trillion.

And they are playing an pivotal role in Obama's foreclosure prevention program, which was announced Wednesday.

Under the plan, Fannie and Freddie will provide access to low-cost refinancing to borrowers with little or no equity in their home. The administration expects this will help up to 5 million borrowers avoid foreclosure.

The companies are also contributing more than $20 billion to subsidize struggling borrowers' interest rate reductions as part of Obama's $75 billion loan modification program. This is expected to prevent up to 4 million foreclosures.

The administration, realizing it needs to boost confidence in the struggling companies, has agreed to double its level of support for the firms to $200 billion each, as well as boost the amount of mortgages they can own or guarantee to $900 billion, up from $850 billion.

The additional funding comes at a crucial time for the firms, which are contending with soaring defaults in their own portfolios as the economy weakens. Both are expected to report large losses -- Fannie by next Monday and Freddie by the end of March.

Already Fannie has said it needs up to $16 billion to cover fourth-quarter losses, while Freddie plans to draw down up to $35 billion more, on top of the nearly $14 billion it already received.

The firms may need more than $200 billion each in government funding, especially since they are holding $1.6 trillion in subprime and Alt-A loans, experts say. But all signs indicate that the federal government will be there to back the companies.

"The government wants Fannie and Freddie to help people buy houses," said James Angel, associate professor at the McDonough School of Business at Georgetown University. "They don't want there to be any limit."

Future of Fannie and Freddie

In the near-term, the federal government could continue operating the companies as they are now or it could deepen its commitment. Many experts are arguing for the latter.

If the administration were to fully take over Fannie and Freddie - putting it into receivership and wiping out the remaining shareholders - it would have a lot more flexibility to use them to prop up the housing market, said Thomas Stanton, a lecturer at Johns Hopkins University. Right now, the government has to keep in mind shareholder interests instead of devoting all efforts to the company's role in housing policy.

Federal officials might choose to use Fannie and Freddie to soak up the toxic residential mortgage assets at other financial institutions, creating a so-called "bad bank," Angel said.

At least Obama should come out and say that the government will back the company's debt, many experts say. Right now, that guarantee is implicit, but it's not enough for some investors, who are shifting to other forms of debt that are explicitly backed by the United States.

Such a guarantee could bring down their financing costs by as much as one percentage point, by some estimates, since the debt would be viewed as less risky.

"Using Fannie and Freddie to address the bust would be cheaper and easier if Congress would simply enact an explicit guarantee of their debt, reflecting the de facto reality," Alex Pollock, resident fellow at the American Enterprise Institute, said in a recent speech.

As for the long-term future of the companies, there are many wide-ranging opinions. Any of these changes, however, are likely years away, experts said.

Lockhart outlined several options. The first scenario calls for the firms to be nationalized and merged with either the Federal Housing Administration or Ginnie Mae, a government corporation that guarantees federally insured mortgages. Lockhart opposes this option because it would expose the government to the significant risks posed by insurance programs.

Or the companies could remain as government-sponsored enterprises, possibly with a continued lifeline from Treasury or a sharp reduction of their mortgage portfolios.

Other experts say the companies' functions should be broken up: The securitization business could be turned over to the private sector, and the housing subsidy mission could remain within the government. Many say the current hybrid structure has proven not to work.

Determining the future of Fannie and Freddie won't be an easy task, no matter when it happens.

"This kind of decision has to be made very carefully," Stanton said. "If they can postpone the decision, it wouldn't be surprising that they might."

Housing fix will help many, but not all

Mortgage help: Do you qualify?