Do women do better in a recession?

Female managers just might have an edge in a rotten economy, says the author of a new book. Here's why, and how men and women can learn from each other's strengths. 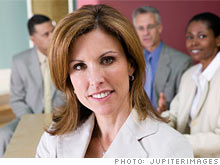 NEW YORK (Fortune) -- There's one sure-fire way to start a heated argument, whether around the water cooler or at a dinner party: Just say something that suggests women manage very differently from their male peers. Then stand back and watch the fireworks.

"The idea that female managers think and operate differently than male managers is controversial, especially among women in the Baby Boom generation who had to fight so hard to overcome stereotypes about women being 'nurturing' and 'intuitive,' which for many years was corporate code for 'not tough enough, or analytical enough, to handle senior management jobs,' " notes Catherine Kaputa, author of The Female Brand: Using the Female Mindset to Succeed in Business (Davies-Black, $24.95).

Controversial or not, it's clear that women are doing something differently: Of the roughly 6 million Americans who have lost their jobs since the recession started in December of 2007, 80% are men, the Bureau of Labor Statistics reports. No doubt, a big part of the reason is that men tend to dominate in the cyclical businesses which have been decimated by the downturn, including manufacturing, construction, engineering and finance. Female-dominated fields like nursing and education have been less hard-hit, at least so far.

Still, says Kaputa, that isn't the whole story. In this job market, standing out from the crowd requires a "personal brand" -- a clear professional identity that highlights a candidate's unique set of strengths and skills -- and that's one area where women may excel. I recently spoke with Kaputa about why female managers just might have an edge in this dreadful economy. Some excerpts from our conversation:

Q. You interviewed more than 150 boomer women for this book -- the generation that has been working long enough to have attained senior management jobs. How do they manage differently from their male counterparts?

A. In general, women are most comfortable with a management style that is more collaborative and less concerned with rigid hierarchy and top-down directives. As it happens, that more inclusive, collegial style is what gets results in global companies today.

And it's clear that collaboration comes naturally to women, starting at a young age. In one study of middle-school kids, which I describe in the book, the researchers gave the same task to a group of boys and a group of girls. The boys appointed a captain, who gave orders, while girls formed a committee of equals where everyone had a say. Both groups achieved the goal -- they just got there differently.

That said, everyone has "masculine" and "feminine" traits to some degree, and some women could really benefit from developing their "masculine" sides, especially when it comes to things like self-promotion. A woman will tend to downplay her achievements, while men talk them up.

I worked on Wall Street for a number of years, and one female senior executive I knew told me that the men who worked for her always started popping into her office a couple of months before bonus time, telling her all about the great stuff they were doing. The women never did, not once. Guess who got the bigger bonuses.

Q. Why do you think women may be better-equipped to deal with hard economic times than men are?

A. There are a number of reasons, starting with the fact that on average, women still earn less than men in the same jobs. So in many cases, when companies are looking for ways to cut costs, the more expensive people get laid off, while the less costly managers stay.

Another cost-cutting advantage women have is that they tend to seek out ideas from more different levels of the company. They reach out to a wider range of people. A man looking for ways to cut costs is likely to rely on his direct reports exclusively. A woman will call somebody she knows on the factory floor, and a shipping clerk, and a call-center worker, and some other people all over the organization. And because she has that ear to the ground, she's likely to get more effective ideas.

Along similar lines, we all know by now how crucial networking is to everybody's career. Women are natural networkers. This is an area where the available research demonstrates that men and women differ in interesting ways. For one thing, women tend to gravitate toward relatively close, even intense, relationships with small groups of contacts, while men tend as a group to connect on a very superficial level with a much bigger group. And women in general are more reluctant to ask a networking contact for a favor, while men generally don't hesitate to ask for things from people they barely know. Women would be wise to cultivate some of that "masculine" boldness.

Q. One of the more contentious claims about women managers is that they're more empathetic than their male peers. But even if that's true, wouldn't empathy be a disadvantage at a time when so many employees are getting laid off?

A. Actually, quite the contrary. Of course, not all female managers are the warm, empathetic sort, but women in general do tend to be more skilled at building emotional ties and fostering a sense of "We're all in this together." Women are more inclined than men, usually, to acknowledge the emotional component of layoffs.

That's important because, like it or not, depriving someone of their job is an emotional blow to that person and to the survivors who are watching it happen. It's not "just business," and women get that.

Readers, what do you say? In your experience, what are the biggest differences -- if any -- between male and female managers? Do you agree that women have certain natural advantages in tough economic times? Have you noticed differences in the ways that men and women network? Put your comments below.