From health care, to food, to retail, to technology, these 15 women show what it takes to lead some of the nation's biggest companies. 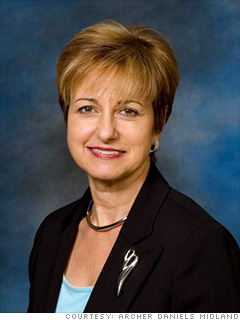 Title: Chairman, president and CEO
Company: Archer Daniels Midland
Company rank: 27
Age: 56
Compensation: $17.5 million
The Fortune 500 may be dominated by male CEOs, but that's no problem for Patricia Woertz, who spent three decades working in the oil industry before joining ADM and becoming the highest ranking woman CEO on the list.
As one of the largest producers of corn-based ethanol, ADM hasn't been immune to the criticism of the ethanol market, or its high-profile bust: Bioproducts profits were off 89% in the company's second quarter ended Dec. 31. But the agricultural services division helped lift ADM's overall quarterly profit by 24%.
Woertz is committed to continued growth: Last fall, the company said it would invest $370 million over seven years in two Brazilian plants to produce ethanol from sugar cane, and in January, ADM unveiled plans to grow its cocoa business through the acquisition of German chocolate company Schokinag.
By Nadira Hira, Fortune writer
NEXT: Angela Braly
Last updated April 21 2009: 3:48 PM ET
Email | Print |