Take this job and tolerate it 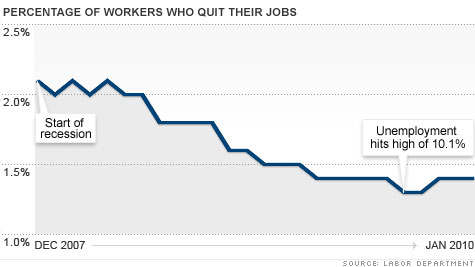 NEW YORK (CNNMoney.com) -- One of the key signs of trouble for the current labor market can be summed up by two words that are rarely spoken today: I quit.

With employers still trimming rather than adding jobs and a record number of unemployed looking for work, job holders are hanging onto their current positions, even if it means being unhappy.

The "quits rate," or frequency of people leaving jobs, is close to the lowest point since 2000, when the Labor Department began tracking the data. And workers' willingness to quit without having another job lined up is well below the historic norms going back to the 1960s, according to a separate government reading.

Recent surveys show many workers would like to find a new job once the labor market improves, but most are just too scared to make the jump yet.

An American Express survey found 54% of the general population willing to make significant concessions in the name of job security, including accepting pay cuts or even demotion.

"They're saying they're staying put," said Laury Sejen, a global practice leader at Towers Watson. She said she was surprised by how dug in workers have become in their current jobs.

"When you look at it from a lot of different angles, it's a mindset shift."

Stuck in a dead-end job

One worker who feels trapped in the job is a product manager for a consortium of travel agencies, who would only talk if her name was not used in this story. She said her stomach churns every day because she dislikes her job and her boss so much. But the state of the job market and worries about job security have kept her from even looking for a new job, especially since her husband was laid off last year.

"I hear so many people are out of work, I feel lucky that I have a job with insurance," she said. "I don't want to update my résumé and send it out and have it get back to my boss."

Another unhappy worker in the accounting department with a Midwest manufacturer says he's limited by the fact that his wife also works, making it difficult to relocate in the current job market.

"The job I'm in is a lot of number crunching that I'm not interested in doing anymore, but my wife likes what she's doing," said the worker who also asked that his name not be used. "If we were to move and she stopped working, it would require us to downsize a great deal."

Both workers quoted said that in a better job market they might be more willing to try to start their own business, but they're nervous about doing so in the current environment.

The lack of mobility from job to job is a problem for more than just those unhappy workers. Economists say it can keep wages down and hinder economic recovery.

Changing jobs is an important method workers use to improve their income, giving them more dollars that they can then pump into the economy. Even the threat of leaving a job is often enough to increase pay.

"When you have low unemployment, people are much more free to leave their jobs and search for jobs with higher wages, and employers will have to pay a premium to find or retain the best workers," said Heidi Shierholz, labor economist with the Economic Policy Institute, a liberal think tank.

It makes sense that people are nervous about changing jobs in the current labor market, said Robert Brusca of FAO Economics.

"Even if you're unhappy in a job, it's the devil you know. You don't know for sure how they'll treat you in a new job, if they'll give you a fair shake," he said.

Brusca said the latest jobs bill passed by Congress won't help get job mobility moving again because it gives a tax credit only for hiring the long-term unemployed.

But the economy would benefit as much from an employer offering a job to someone already working as it does from the hiring of someone without a job, because such a hire is likely to open up another position in the economy. He said the law is an example of the difficulty that Congress has reviving the moribund labor market.

Experts say the bad housing market is another factor keeping people from switching jobs, since people won't be willing to relocate for a better position if they have to take a large loss on the sale of their home.

And the unwillingness of workers to leave an established job to try to start a new business also slows economic growth.

The Labor Department estimates that more than a million fewer jobs were created than normal during the recession because of the low rate of new business start ups. While much of that could be due to the credit crunch and the overall economic downturn, some new businesses were undoubtedly lost because current employees are unwilling to take a chance to start something new.

"Until the economy gets better, many people won't be willing to take chances. And we need them taking chances," Brusca said.

Were you stuck in a job you hated and finally decided to leave? Tell us about itand you could be included in an upcoming story on CNNMoney.com.

One jobs bill down -- what happens next?