The dollar strengthened versus the euro, dragging down dollar-traded oil, gold prices and stocks. 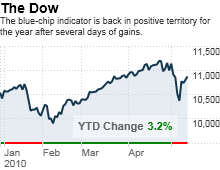 Stocks rallied Monday and Wednesday as investors moved away from worries about Europe's debt crisis spreading and instead opted to scoop up issues hit in last week's massive sell off. Tuesday brought some selling, but it wasn't enough to take away from the week's gains.

After such an advance, stocks were adrift through most of Thursday, before turning lower near the close.

"The last few days we've seen a tug of war between the concerns investors have about the financial system and the lack of alternatives in terms of where they can put money," said Larry Glazer, managing director at Mayflower Advisors.

He said that by default this struggle has brought some money into stocks, which at least offer better returns that low-yielding bonds. However, trading volume hasn't been as strong as it was during last week's shakeout, with investors still wary.

Last week, the three indexes lost more than 5% in three trading sessions, including Thursday, when the "flash crash" sent the Dow down by as much as 1,000 points before it recovered. Fears about the European debt crisis spreading were tempered Monday after European leaders announced an almost $1 trillion bailout. But the concerns about Europe linger.

Labor market: Approximately 444,000 Americans filed new claims for unemployment last week, according to the weekly jobless claims report from the Labor Department, the lowest number since late March. Claims stood at a revised 448,000 the previous week. Economists surveyed by Briefing.com expected claims to fall to 440,000.

It was the fourth consecutive week of declining claims, but the improvement hasn't been sufficient to drive real job growth.

Banks: Reports Thursday said some of the financial industry's leading corporations are facing investigations at both the federal and state level, as inquiries into the events that contributed to the crisis accelerate.

New York Attorney General Andrew Cuomo's office confirmed reports that it is investigating whether many of the same firms provided misleading information to credit rating agencies.

Bank stocks as a whole were modestly lower, with the KBW Bank (BKX) index off 0.3%.

But Cisco Systems (CSCO, Fortune 500) shares fell 4% even after the company reported higher sales and earnings that beat estimates during what its chief executive called the company's "best quarter" ever.

Dollar and commodities: The dollar gained 0.6% versus the euro and fell 0.6% against the yen. The euro remains at a 14-month low versus the dollar.

U.S. light crude oil for June delivery fell $1.25 to settle at $74.40 a barrel on the New York Mercantile Exchange.