The Dow Jones industrial average (INDU) lost 46 points, or 0.5%, after having been on both sides of the unchanged line through the session. The Nasdaq (COMP) composite slipped 9 points, or 0.5% and the S&P 500 (SPX) index dropped 0.5% as well. 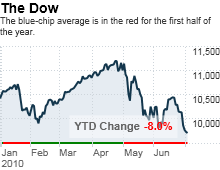 Stocks slid through most of the day as investors digested the jobs report ahead of a long holiday weekend. All U.S. financial markets are closed Monday in observance of Independence Day.

Stocks have tumbled in recent weeks, with the S&P 500 down more than 15% since the April highs on worries about the European debt crisis and U.S. economy. Stocks lost ground Thursday following worse-than-expected economic readings on manufacturing and housing.

On Friday, the jobs report provided little relief, showing a rise in private sector hiring that was smaller than expected, and a drop in the overall number of jobs.

"The rise in private-sector payrolls shows we are moving in the right direction, but just not fast enough to keep up with all the headwinds in the economy," said Jane Caron, chief economic strategist at Dwight Asset Management.

Most of the decline was a result of the 225,000 temporary Census employees that were let go after the conclusion of the survey.

On the upside, the private sector added 83,000 jobs, the report showed. However, that was shy of the 112,000 economists had been expecting.

The unemployment rate, generated by a separate survey, dropped to 9.5% from 9.7% in May. Economists thought it would rise to 9.8%.

Factory orders: In the day's other economic report, the Commerce Department said factory orders fell 1.4% in May after rising 1% in April. Economists thought orders would drop 0.6%.

Currency: The euro gained versus the dollar but remained above the four-year low of $1.188 hit earlier in the month. The dollar was up slightly versus the yen.

If you thought the 1st half was bad...