After the close, Intel reported higher quarterly sales and earnings that rose from a year ago and topped expectations. It was the company's best quarter ever, reflecting strong demand from business customers. 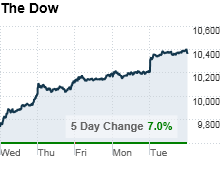 Aluminum giant Alcoa (AA, Fortune 500) reported higher quarterly sales and earnings that topped estimates late Monday, beginning the quarterly reporting period on a positive note. The Dow component also estimated that aluminum demand would rise by 12% this year, versus the previous forecast for a rise of 10%.

But investors will focus more on what companies say about the second half of the year.

Investors are hoping to see that corporate profits have held up despite recent worries about the pace of the economic recovery and the European debt crisis. Those worries sent the major gauges down over 15% in two months.

But in the last week stocks have rebounded, with the major gauges jumping 5% last week to post the biggest weekly gains in a year. Stocks were mixed Monday before resuming the rally Tuesday.

"The market was oversold on the fear and panic regarding Europe and the threat of contagion," said William McDermott, managing director at Morgan Joseph. "Now a few earnings reports and guidance have turned things around."

However, he said that a lot of the rally has been about traders and funds jumping in and deciding to follow the momentum for the short term. Whether the rally is sustainable will depend on the earnings forecasts and continued news out of Europe in the upcoming weeks, he said.

"There was tremendous pessimism for weeks, followed by a strong rally off the lows," said Larry Glazer, managing director at Mayflower Advisors.

But he cautioned that there are still negatives lurking, including the impact of financial reform, worries about debt and the weakness in the housing and labor markets.

AIG: Shares of the troubled insurance giant surged about 6% after reports said the AIG (AIG, Fortune 500) board plans to meet on Wednesday to discuss a public offering of its Asian life insurance division, AIA.

A sale or public offering of that unit is a crucial part of AIG's strategy to raise funds by divesting divisions of its company to pay back the $102 billion it owes U.S. taxpayers.

Economy: The trade balance widened to $42.3 billion in May from $40.3 billion in April, surprising economists who thought it would narrow to $39.5 billion, according to Briefing.com forecasts.

The U.S. government ran up a budget deficit of $68 billion in June, the Treasury Department announced Tuesday. That was slightly lower than the $70 billion loss analysts had predicted, according to Briefing.com forecasts.

Europe: Moody's cut Portugal's debt rating two notches to A1 with a stable outlook. The rating is still investment grade; however, the agency says it expects the country's outlook is "likely to remain relatively week."

Last month, news that a ratings agency had cut its rating on one of the so-called PIIGS -- Portugal, Italy, Ireland, Greece and Spain -- would have sent stocks lower.

But investors seemed willing to shrug off Portugal's downgrade, after Greece staged a successful auction of its government debt, raising about $2 billion to repay some of the country's outstanding loans.

The news boosted European markets and sent the euro to a fresh two-month high against the dollar.

Currencies: The euro gained versus the dollar, posting a two-month high in intra-day trade. The greenback also fell versus the Japanese yen.

Commodities: U.S. light crude oil for August delivery rose $2.29 to settle at $77.15 a barrel on the New York Mercantile Exchange.

Bonds: Treasury prices fell, raising the yield on the 10-year note to 3.11% from 3.05% late Tuesday. Debt prices and yields move in opposite directions.

How much of a hit did you take in the recent correction? Are you worried about a bear market? What changes have you made in your portfolio and what changes do you plan on making for the rest of the year? E-mail your story to realstories@cnnmoney.com you could be featured in an upcoming article. For the CNNMoney.com Comment Policy, click here.