BP board to meet amid reports of CEO's exit 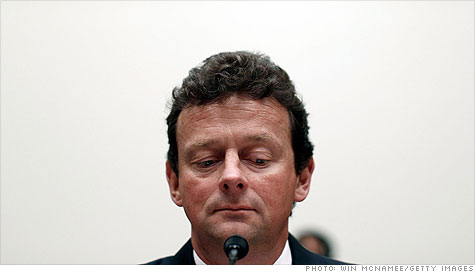 BP CEO Tony Hayward testifies before Congress on June 17. BP is widely expected to announce the departure of Hayward, who has been criticized for his handling of the Gulf of Mexico oil spill. By the CNN Wire StaffJuly 26, 2010: 3:07 AM ET

(CNN) -- BP's board is planning to meet Monday evening, as reports swirl about the imminent departure of embattled CEO Tony Hayward.

In a statement on Monday morning, the company said its board would meet Monday night ahead of the announcement of its second-quarter earnings, and decisions "will be announced as appropriate."

"BP notes the press speculation over the weekend regarding potential changes to management and the charge for the costs of the Gulf of Mexico oil spill," the statement said.

"BP confirms that no final decision has been made on these matters," it added.

The company said Sunday that Hayward was still on board despite widespread reports that he was on the verge of leaving the massive multinational oil company.

"Tony Hayward remains our chief executive and has the full support of the board and senior management," company spokesman Mark Salt told CNN Sunday.

Hayward has been in the crosshairs of criticism since the BP-contracted drilling rig Deepwater Horizon exploded in the Gulf of Mexico in April, killing 11 people.

Some of Hayward's public comments about the disaster, the worst oil spill in U.S. history, have sparked outrage in the United States.

In May, in the course of apologizing for the spill, Hayward added, "There's no one who wants this over more than I do. I would like my life back." And he played down the size of the spill in an interview with the British newspaper The Guardian, saying the amount of oil spilled at that point was "relatively tiny" in comparison to the "very big ocean."

He received a largely bipartisan pounding during an appearance before a congressional committee in June. And when the committee's leading Republican apologized to the BP boss for what he called the Obama administration's "shakedown" of the company, swift criticism spurred him to walk back his remarks.

BP (BP), rig owner Transocean (RIG) and oilfield services contractor Halliburton (HAL, Fortune 500) have blamed each other for the disaster, which is under investigation by numerous federal agencies and Congress.

Questions also have been raised about whether BP was involved in a possible deal cut to release the Lockerbie bomber to protect British business interests in Libya. Britain and Libya sparred over whether Abdelbeset Ali Mohmed al Megrahi should be included in a prisoner transfer agreement the two nations were negotiating. British officials and BP said that the oil giant's interests -- the company was seeking a huge deal to drill for oil in Libya -- were a consideration in those negotiations.

British media, The Wall Street Journal and The New York times reported Sunday that Hayward could be out as soon as Monday. The BBC reported that Hayward is "negotiating the terms of his exit, with a formal announcement likely within 24 hours." It did not cite a source.

The New York Times reported late Sunday that BP's board was expected to name its most senior American executive, Robert Dudley, as its chief executive on Monday, citing a source close to the board.

Hayward was pulled off day-to-day leadership of the cleanup operation in June in favor of Dudley.

British newspapers said an announcement regarding Hayward would come by Tuesday, when the company is due to report half-year results. They also did not name sources, while the New York-based Journal cited "people familiar with the matter."

BP has been working with federal and state authorities in the Gulf region since the spill began, but officials there professed little insight into the reports. Retired Coast Guard Adm. Thad Allen, who is heading the federal government's response to the spill, said he has no knowledge of the inner workings of BP or personnel decisions.

New Orleans, Louisiana, Mayor Mitch Landrieu noted that Hayward's "initial foray" into the dealing with the now three-month-old spill "met with a negative response." But Landrieu added, "We welcome whatever leadership they have in place."

"It's not necessarily important who the person is, but with BP's ultimate attitude in restoring the damage that they have caused," Landrieu told reporters after an aerial tour of the area Sunday. "So we welcome a positive attitude and a constructive attitude from BP, and we hope, in the future, that we get it."

And Rep. Ed Markey, one of the company's leading critics on Capitol Hill, said the Gulf will spend years recovering from Hayward's "failed leadership."

"The new leaders of BP will have an uphill climb to correct the legacy left by Hayward, indelibly inked by the disaster in the Gulf," Markey, D-Massachusetts, said in a written statement on the reported-but-still-unconfirmed ouster.

The disaster has sent BP's stock price plunging. Meanwhile, U.S. senators want to question Hayward about the role of BP in the release from prison of al Megrahi, the Libyan convicted of the 1988 Lockerbie bombing that killed 270 people. Most of the dead were Americans.

BP secured a deal to drill in Libya at about the same time that Britain and Libya finalized a treaty about transferring prisoners from one country to the other to serve their sentences. But Megrahi was not freed under the agreement, or by the British government: He was freed by the Scottish government, a separate body, in August 2009 on the grounds that he has terminal cancer was unlikely to live much longer.

Hayward, who has been with the company for 28 years, became chief executive in 2007.

Experts told CNN in June that Hayward will probably not get a lucrative package of bonus money and stock awards that many U.S. companies give to outgoing CEOs as so-called golden parachutes.

"He will be lucky to get a single year's salary," said Paul Hodgson, a senior researcher at The Corporate Library, a governance group. "And even that could be mitigated in certain circumstances."

Additionally, he held more than 535,000 shares in the company as of December 31, which would currently be worth about 212 million pounds (about $327 million).