Wall Street: Eyes on the Fed 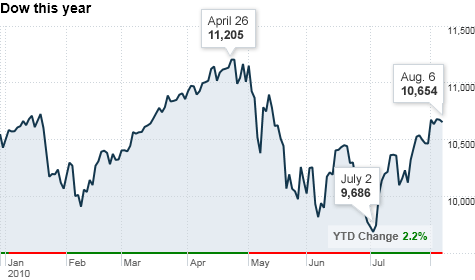 NEW YORK (CNNMoney.com) -- As the euphoria of corporate earnings season fades, the stock market could drift in a narrow range this week as investors come to grips with the prospect of a sluggish economic recovery.

The main event will be Tuesday's policy statement from the Federal Reserve. While the central bank is widely expected to maintain its long-held policy of near zero interest rates, there is speculation the Fed may hint at additional plans to support the economy.

"Investors will be looking to see what the Fed is prepared to do," said Alec Young, equity strategist at Standard & Poor's, adding that a drop in Treasury yields last week suggests the bond market expects the Fed to resume its purchases of U.S. debt.

But the stock market will be range bound next week, Young said, as investors focus on the pace of the economic recovery, which is turning out to be less robust than many analysts had expected.

"There's so much sensitivity about how strong or weak the recovery is," he said. "It's going to be difficult for the rally to gain any traction as long as the macro economic indicators continue to be disappointing," he added.

Stocks ended last week on a sour note after a report from the Labor Department showed Friday that the tepid pace of hiring in the private sector failed to offset the loss of thousands of public sector jobs in July. But stocks still managed to post weekly gains.

After stocks surged 7% in July on better-than-expected quarterly earnings from major U.S. companies, investors have been more cautious in August as the corporate reporting period winds down and economic concerns come to the fore.

Investors have been particularly nervous about the outlook for the job market, since consumer spending, the main driver of U.S. economic activity, is closely tied to unemployment.

"In this recovery it appears as if the consumer has been taken out of the equation," said Quincy Krosby, financial market strategist with Prudential Financial.

Despite a growing consensus that the recovery will be underwhelming, most analysts do not expect the economy to slip back into recession.

"It will be a very modest recovery, nonetheless the trajectory is positive," said Krosby.

Meanwhile, automaker General Motors is expected to file documents with the Securities and Exchange Commission some time this week to officially register its initial public offering.

Monday: There are no economic reports on the agenda.

Tuesday: The Federal Reserve will issue a policy statement in the afternoon. The central bank is widely expected to leave its benchmark federal funds rate in a range of 0 to 0.25%, where it has been since December 2008.

A report on wholesale inventories is due shortly after the market opens.

After the closing bell, Walt Disney (DIS, Fortune 500) is among the companies slated to report quarterly results.

Wednesday: The government reports on the U.S. trade deficit before the opening bell.

Economists surveyed by Briefing.com expect the trade gap widened slightly to $42.5 billion in July from $42.3 billion the month before.

In the afternoon, the Treasury Department is slated to release its July budget numbers. Economists expect a deficit of $169 billion in the month after $180.7 billion shortfall in June.

Thursday: The Department of Labor releases weekly jobless claims figures in the morning. The number of Americans filing new claims for unemployment last week is expected to have dropped slightly to 465,000. Continuing claims, a measure of Americans who have been receiving benefits for a week or more, is expected to rise to 4.55 million.

Reports on July export and import prices also come out before the opening bell.

Friday: Investors will take in top-tier reports on inflation, retail sales and consumer sentiment in the morning.

The Consumer Price Index, the government's main inflation gauge, is expected to show an increase of 0.2% in July after prices fell 0.1% the month before. Core CPI, which excludes volatile food and energy prices, is forecast to be up 0.1% after a gain of 0.2% in June.

At the same time, a report from the Commerce Department is expected to show that retail sales rose 0.5% in July after falling the same amount the month before. Retail sales outside of the auto sector are forecast to be up 0.2%.

After the market opens, the University of Michigan Consumer Sentiment Index for early August is expected to edge up to 70 from 67.80.

In addition, a report on June business inventories is due later in the morning.

Did the recession actually end?