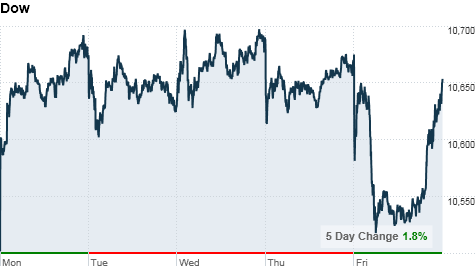 NEW YORK (CNNMoney.com) -- Stocks closed lower Friday as concerns about unemployment continued to weigh on the market, although all three major gauges ended the week with gains.

Stocks opened lower after a government report showed the tepid pace of hiring in the private sector failed to offset the loss of thousands of public sector jobs in July. The selling gained momentum as stocks fell through key technical levels, with the Dow shedding 160 points in the morning. But the market recovered late in the day to close near session highs.

All three indexes ended the week higher. The Dow and the S&P both rose 1.8% over the last five days, while the Nasdaq gained 1.5%.

The dour jobs data added to concerns about the economic recovery, which is turning out to be less robust than many analysts had anticipated. In particular, investors are worried that consumer spending, the main engine powering the U.S. economy, will suffer as unemployment remains high.

"We are still seeing jobs growth but at a much slower pace than expected," said Ryan Larson, head of U.S. equity trading at RBC Global Asset Management. "It's going to be hard to support earnings going forward without jobs growth."

Better-than-expected corporate earnings helped boost the Dow 7% in July, which was the best month for stocks in a year. But the cloudy outlook for the U.S. economy has weighed on the market so far in August, which is historically a bad month for Wall Street.

Friday's jobs report raised speculation that the government may take additional steps to shore up the recovery as previous economic stimulus measures fade.

"Traders may be thinking that this will spur the Fed into action," said said Quincy Krosby, financial market strategist with Prudential Financial.

The Federal Reserve is scheduled to make a policy announcement next week and the central bank is widely expected to hold interest rates steady. But some analysts say the Fed could signal more aggressive plans to support the economy, such as resuming its various asset purchase programs.

Meanwhile, investors flocked on Friday to less risky assets such as U.S. Treasurys and gold futures. The U.S. dollar slumped in the currency market, and oil prices tumbled.

Jobs: The Labor Department reported that the economy lost 131,000 jobs last month, as the government shed 143,000 temporary workers hired for the decennial census. Economists polled by Briefing.com were expecting 87,000 job losses during the month.

The report showed that private sector added 71,000 jobs, less than the 83,000 gain economists were looking for.

"The direction for the private sector is positive, but the gain is not robust enough at this point in the recovery," said Mark Luschini, chief investment strategist at Janney Montgomery Scott, adding that private employers need to be adding 125,000 jobs each month for the economy to be considered healthy.

The unemployment rate was unchanged at 9.5%. It was forecast to rise to 9.6%.

Investors were also disappointed by the revision to the losses in June. The report showed that the economy lost 221,000 jobs in June, far more than the 125,000 the government previously reported.

Companies: Fannie Mae said it lost $1.2 billion in the second quarter, down significantly from an $11.5 billion loss in the prior quarter. The government-run mortgage finance company said that its financial condition has vastly improved over previous quarters, but it still requested more government assistance.

AIG (AIG, Fortune 500) reported a quarterly net loss of $2.7 billion due to the sales of some of its divisions, a continuation of its restructuring following its disastrous losses. But its income from continuing operations more than doubled. Shares of the insurer rose 2.6%.

Currencies and commodities: The dollar fell versus the euro, the British pound and the Japanese yen.

The two-year note's yield dropped below 0.5% for the first time ever Friday, but then pared back some of those losses to trade at 0.52% later in the day.

Investors to oil companies: Be prepared for spills
First Published: August 6, 2010: 9:41 AM ET